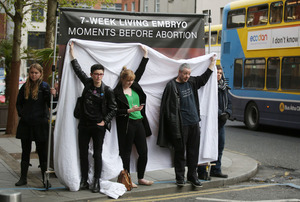 Pro Choice campaigners block a banner from the ‘Irish Centre for Bio-Ethical Reform’ (ICBR) outside the Rotunda Hospital in Dublin during the Eighth Amendment referendum campaign last May.

Responding to criticisms of his post last Thursday on the abortion debate, Terry McMahon writes:

Getting attacked seems inevitable when you deviate from whatever the new consensus morality is. Apparently, it comes with the territory now. But the bile is reaching new depths.

And, not only are the rage-fueled reactions disconnected from any reality, the reactionaries spouting the bile are proud of themselves. They have allies now. And righteousness on their side. And carte-blanche authority, it seems, to projectile vomit over any dissent.

When the abortion campaign began, I was voting YES. I was doing it for the women who told me they wanted YES. There were some who were saying the opposite but I was so caught up in the fervour of doing the right thing that I barely registered them.

So confident, in fact, was I in how I was voting, I decided to ignore those dissenters a little less and explore the subject a little deeper by asking some questions. I was looking forward to the clarity with which my side would articulately address those questions.

That’s when it began to get ugly. But the ugliness wasn’t from the NO side. It was from people on my side. People I knew. People I cared about. People I believed knew better. It was a strange feeling.

Nobody likes to be an outsider. Every time I tried to probe a little further in an attempt to understand, the reactions got uglier.

There are always folks out there who will hate no matter what you do but this was different. I desperately wanted to support the many magnificent women who were brilliantly articulate advocates of the necessity of voting YES.

Yet, the deeper I dug, the more impossible it became to ignore the fact that the child was being systematically erased from the conversation. And any questioning of that fact only escalated the rage.

I spoke with many women. And men. And couples. Then spoke with more women. I gorged on all the podcasts. Read all the articles. Spoke with and listened to some of the best people I’ve ever met. On both sides. I also encountered some of the most rabid revisionists it has been any man’s misfortune to encounter, but they were in the minority.

Noble people on the YES side invited people who may have been conflicted to ask questions on social media. It was a kind offer. And smart. So I did ask. Simple, sincere questions from a conflicted soul.

Lenny Abrahamson and Colm O’Gorman proved to be two patient educators. But that’s where it ended. I had to delete multiple posts because of the rabid reactions of some of these new selectively sensitive social warriors.

They didn’t know me but that didn’t stop them becoming self-styled experts on my motivations. They may have had ‘humanitarian’ in their bio but, trite as it sounds, all they had was hate in their hearts.

It was relentless and cruel and deliberate. And, it has to be said, the people who did know me felt no need to come to any defence. Asking basic questions had rendered me an asshole, forever more.

Social media exploded during the campaign. Language was bastardised into the philosophy of convenience and complex morality was dismissed as the weapon of the ignorant. Any deviation was aggressively rejected or turned into an accusation of way-to-make-it-be-all-about-you.

You might feel this was not the case but that’s probably because you were one of the decent people who didn’t feel the need to destroy any and all dissent. Check it out, though. You’ll find it all turned a little crazy. I didn’t know what to think. Or to feel. Or to do.

Then I got blocked by the Repeal Shield. No explanation necessary. No enquiry accepted. Blanket censorship dressed up as liberal progressivism. Ask us any question you want, except the ones we don’t want you asking.

I was lost. Broken. Wanting to do the right thing. Wanting to be on the right side of history. Wanting to be a decent human being. Trying to de-weaponize democracy at the ballot box, I re-read precisely what we were voting for. Over and over. Just to make sure. I was about to tick the box and read it one more time. Words were never more important. I hesitated. Then voted.

As the results slowly trickled out later that day, I already knew it was going to be YES. I had known for weeks. The manipulated wording of the positive YES versus negative NO proposal was already too one-sided. Besides, the campaign was so brilliantly constructed, it was impossible for it to fail.

Like a frenzied new movement led by all of Ireland’s political parties. Compassion. The repressive regime of cruel, old-world FASCISM was being replaced by a fuzzy, new-world political philosophy that could just as easily have been christened the darkly comical name COMPASSIONISM.

The celebrations were incredible, and, frankly, a little disturbing; unless you had already succeeded in erasing the unwelcome side of the conversation from your soul.

We head just learned of the deaths of multiple women through faulty smear tests but our government heroes they had their sick slates wiped clean in Dublin Castle. As we chanted their names we made heroes out of psychopaths.

Yet, that can be understandable. Anybody can get caught up in the fire. It was a raw and painful campaign. For all sides. In the making of any big moment, mistakes can be made.

Now we’re into the legislative side of things. Those same Government heroes whose mismanagement allowed women die, and are happy for homeless children to have no future, and for those children’s mothers to live in abject poverty, are determining the finer details of the lucrative world of abortion.

Some deeply troubling details are being revealed but the majority gets what the majority wants and the minority needs to shut the hell up about it. That’s the democratic way. And you can’t argue with that. At least you’re not supposed to.

I would never judge a woman for deciding to have an abortion. Nobody knows the complexities of a person’s state of being and it’s her own damn business what she – or they, the couple – decide.

But I did have one question. It was related to the talk of refusing to administer pain relief to an about-to-be-aborted baby on the grounds that it would further “shame” the mother.

The cruelly dismissive word coined by an Irish politician to describe this, “obsession with the foetus” over the rights of the mother is, “foetocentric.” It’s not even a real word. But what a word. And what a concept. Foetocentric. Caring too much.

What we do know, however, is we have a Government that has already shown how psychotically callous it can be to our most vulnerable citizens. So, is it unfair to ask if we should perhaps petition for basic pain relief to be granted by law to a soon-to-be painfully dying human being?

That’s all I’m asking. And, for that absurdly basic question, the Broadsheet attacks began. For those of you who want to write, “way-to-make-it-be-all-about-you,” this is a personal post. That’s all it is.

I have never insulted anyone from the YES side. In fact, the only time I passed public judgement on anyone was when members of the Irish Centre for Bio-Ethical Reform (ICBR) stood outside maternity hospitals with images of developing babies.

All I have tried to do is wrestle with a profoundly painful moral question. And I did it publicly in the hope that conflicted people like me might receive insight beyond that complex quandary. I never wanted to hurt anyone. And I still don’t. And that’s why this will be my last post on this subject.

Having asked that basic question about pain relief for an about-to-be-aborted baby, a  commenter on Broadsheet, who I don’t know, and who hid behind an alias, publicly posted the following:

“Do you want answers about abortion, Terry? Have some conversations with women who have experienced it. Listen.

Ask us what a miscarriage feels like. Ask us how we feel about the cost of childcare, the lack of subsidizing of childcare, and the fact that we do most of the grunt work in raising children and keeping homes.

Ask how it feels for us to have to defend our decisions and experiences to people like you, who perform a burlesque of macho concern, but are actually as thick as two planks.”

It’s tame compared to some of the things that have been posted about me – no doubt there is more bile to come – but this well-written articulation of her accusatory hatred does seem a fitting end to what has been a horrible education.

Thank you for engaging.

190 thoughts on “A Horrible Education”