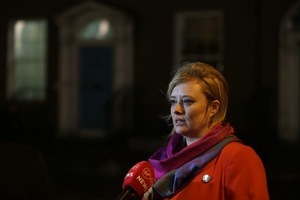 Saying the meeting started with a handshake, but didn’t end with one, Ms Cahill told the Belfast Telegraph: “As far I’m concerned Mary Lou McDonald has abdicated her responsibility over this.”

In a statement following the meeting, Mrs McDonald described her conversation with Mairia Cahill as “lengthy and candid”.

‘It was distressing to listen to the nonsense’: Mairia Cahill speaks out after meeting with Sinn Fein president (Belfast Telegraph)

In which Mary Lou McDonald has a bizarre hissy fit over her *literal* Dail seat https://t.co/Vb8bElp3PB pic.twitter.com/ZfIEjh8L4t

Seriously… this is ‘political journalism’? Nice to see such support for a female leader by the women on here, ‘hissy fit’, ‘drama queen’,, well done folks. “Mary Lou McDonald”

Yesterday: ‘I Have No Feeling In The Left-Hand Side Of My Face’

23 thoughts on “That Seemed To Go Well”