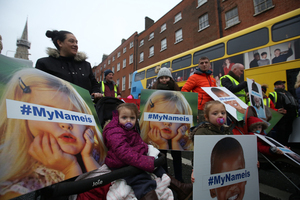 Ella (left), who is pregnant, and her children, from left:, Skyler (3), Paige (2), Logan (4), Torrie (10) and her partner Derek who are homeless and living in Emergency Accommodation at yesterday’s Housing Demo in Dublin city centre.

Told my ten-year-old he was coming on the march in support of homeless people. He went nuts. Bananas. Barking in protest. My three-year-old was sitting on my shoulders, ready to leave, confounded by her older brother’s rage. This is the exact conversation, word for word.

Him: “But marches don’t change anything! You all think you’re doing something but you’re not. The scumbag Government don’t care. It’s bullshit. I’m not going. I’m not. You can’t make me. I’m not going.”

I didn’t know whether to high-five him for calling the Government, “scumbags,” or chastise him for saying, “bullshit.” But I did neither. Because, on multiple levels, the kid had a point. I had no smart comeback so I told him the only broken truth I know these days.

Me: “You’re a ten-year-old kid. You have your own bedroom upstairs. You have a place you can call your home.”

Him: “I’ve heard all this bullshit before.”

He was making to leave. I had five seconds to reach him.

Me: “There are four thousand kids out there who don’t have a place to call home.”

He didn’t stop but he did slow down.

Me: “What happens when one or two of them see a ten-year-old kid on the television, marching for them?”

He stopped. He didn’t turn around. But he did stop.

Me: “What happens when that boy or girl sees a kid who doesn’t know how to really change anything in our crazy country but still puts his coat on to march in the rain for them?”

Me: “What happens when those boys and girls see that ten-year-old kid leave his warm bedroom and cosy house to let them know that he hates their scumbag bullshit Government as much as they do?”

Me: “What happens when some stranger who is only ten-year-old still finds the basic decency to make those kids feel less alone in the world by trying to give them a tiny sense of hope for the future?”

He didn’t move. That was it. I had nothing left. The words had run out. He turned and stared at me again. It was coming. I could feel it. The explosion of words to justify his anger.

He opened his mouth to give his standard, brilliant counterargument. But only one word came out. And it was quiet. And it pumped my heart with blood. Because it was the look in his eye when he said it. The look that told us both that he understood. The look that nearly made me burst out crying.

He put his coat on and opened the front door of his home, where he has a warm bedroom upstairs, then looked up at his three-year-old sister sitting on my shoulders.

It took a ten-year-old boy to make me remember to never forget why we march.

They Shoot Up So Fast