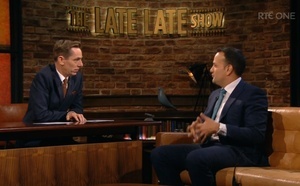 The problem with this is that all the questions are taken as having equal weight and substance; there is no room to improvise – though Tubridy is far from being Robin Williams in terms of improvisation – and worst of all perhaps, there is no time afforded to the interviewee.

A few weeks back, even Mary Robinson, that paragon of patience, got a bit tetchy with Mr Tubridy’s interruptions; because, quite simply, they demonstrated that he wasn’t listening.

He was looking at his list, desperate to get to the end, so that he could do his more comfortable act of taunting the poor people of Ireland with baskets of bank-notes for a stupid money-drooling quiz.

Gay Byrne, like Michael Parkinson, knew that once you had them talking you let them at it. Mr Tubridy, on the other hand, seems to regard interviewees as obstacles between him and the completion of his list of questions.

The interview last Friday with Leo Varadkar should have been about one question and one question only: the 10,000 homeless people, parked in hotels at the taxpayer’s expense, as sacrifices to the market, in the hope of getting private investors to build houses to save Fine Gael having to go against its right-wing ideological principles by embarking on a believable social housing programme.

Mr Tubridy quoted Micheál Martin as saying that there was an upper middle-class resistance to building local authority housing.

Mr Varadkar looked pained, puzzled and bewildered at this one, denying there was any class prejudice in Ireland. Sure wasn’t he from Blanchardstown and now he’s taoiseach. Case closed. This, by the way, doesn’t count as evidence, since it is merely anecdotal.

Mr Tubridy wasn’t about to launch into a discussion on Ireland’s non-existent class structures, not with a quiz no more than ten minutes off; so, the exploration of alleged class prejudice in Ireland ended with Mr Varadkar implying with a look that maybe Micheál Martin was delusional.

If I may offer a word. The Irish class system can’t really be discerned from the top, you have to be nearer the bottom to gain a full appreciation of the biological functioning of Ireland’s arsehole.

Well, that seems like a good idea. We all know where that led. It led to homelessness when the banks became merciless and evicted families, leaving the tax-payer to pay hotel bills to hoteliers who are doing really well out of homelessness, thank you very much, buying up property by the bucket-load and entering the equally lucrative private-rented sector.

How about raising the minimum wage, putting a freeze on rents and building social and affordable housing?

No. We can’t do that. We know where that led. Ghost estates. Pyrite and mica (sounds like the ugly sisters) and Priory Hall.

So, best not to build at all while we conveniently forget that all those building failures have absolutely nothing to do with building social housing, and everything to do with unregulated building during the boom.

The ghost estates, as everyone knows, were a legacy of the financial crash, caused by the banks who were equally unregulated. None of these things had anything to do with social housing.

Isn’t that a lie? On the Late Late Show. By the taoiseach? Or am I being old-fashioned?

Mr Tubridy played good side-kick by defining the homelessness crisis as a problem that the government just can’t get a grip on. A difficult insoluble that is taxing the best brains of the nation; namely, the taoiseach’s.

How many times have you heard a government arguing for their own ineffectiveness to explain their lack of action on an issue? I don’t think I’ve ever heard that angle played before. It’s as if the government, and the taoiseach in particular, are also claiming to be victims of the homelessness crisis.

…The reason the taoiseach won’t embark on a social housing programme is because he doesn’t believe, as he stated in the Dáil some time back, that people should get houses “for nothing”.

…As he helpfully pointed out last year, people are homeless in lots of places, it’s not just here. Homelessness is a fact of life. Just one of those things…Do you like my socks?”

Mr Tubridy needed to get to the next question. He played good side-kick again by leading into the Health topic with a question that is just a dream for any politician intent on privatising health-care.

“Is the HSE fit for purpose?” says helpful Mr Tubridy, nicely framing the service as the problem, which could no doubt be “solved” by privatisation.

The Tories do the same in Britain in their efforts to dismantle the NHS. It’s a favourite strategy of the right, as everyone knows. Starve the service of funding, run it down and then say “It’s not fit for purpose” before proposing some “guy” you happen to know who could do it better, for a fee.

It must be comforting for the taoiseach to know that he has a leading light of the main media mouthpiece in Ireland riding shotgun with him on this one.

Mr Tubridy is too privileged himself to get into the style of interviewing that is needed to really interrogate Fine Gael’s privatisation goals; as the taoiseach is too privileged to even see the problem of homelessness in the first place, except as a kind of abstract “problem”, out there somewhere.

This blindness of the privileged was brilliantly summed up by the taoiseach himself a while back when he suggested that first time house-buyers, who can’t earn enough from the rigged employment and housing market to buy a home, should borrow the money from their parents.

Clearly, in his privileged reality and experience of the world, all parents are rich.

He tried to put down a heckler by mocking the cheap seat the heckler was in, taking this as proof of not knowing the right people and mocking the heckler for being so socially insignificant and “disconnected”.

Mr Tubridy is the natural consequence of a system distorted by nepotism. He’s not great at the job, but he has the position because the position is seen as valuable, a seat of power, which it is, and is now occupied by Todd Andrew’s grandson.

So Mr Tubridy’s non-interview of Varadkar is the consequence of habitual ingratiation in a rigged system, as he struggles to be the best little TV interviewer he can be, by asking all the right questions in the allotted time. The resulting meek performance is the natural sum of the parts of the quintessential Yes man.

Both Mr Tubridy and Mr Varadkar have a shared boast. They both claim to be descendants of freedom fighters.

But the point seems to have escaped them both that their grandfathers and Granduncles, Tubridy’s in Ireland, and Varadkar’s in India, both challenged the same imperial system on a basic platform of demanding equality and respect from a privileged class out of touch with the plight and misery of those people the freedom fighters represented.

It’s likely then, that if the revolutionary grandads and granduncles met their “freedom-fighting” descendants, they would be absolutely disgusted with the pair of them…

…All is well on planet Tubridy/Varadkar. In fact, the only real problems in their world, the ones that have been spoiling Mr Varadkar’s taoiseach honeymoon, are all these homeless, sick, underemployed, underpaid losers clogging up the “organisation” and bringing all manner of unwanted stressors into the new taoiseach’s career choice.

Who are they? Where are they coming from, these dregs of humanity?

Mr Varadkar doesn’t appear to realize that all the neo-liberal policies he pursues with such privileged certainty only serve people who are turning Ireland, like the US and the UK, into a kind of factory that relentlessly produces human and environmental casualties.

That the sick and the poor are the disease, rather than the symptoms of the disease of neo-liberalism which he represents and serves like…well, like the CEO of some American corporate organisation in all its profit-seeking ruthlessness.

Mr Varadkar still believes he is progressive, simply because he is young, as taoiseachs go. That’s the entire Fine Gael gambit. To use youth to appeal to the young who are working for peanuts, being driven into exile and can’t afford either to rent or buy accommodation, no matter how many jobs they have.

…Mr Varadkar doesn’t appear to realize that the neo-liberal game he is selling is already past its sell-by date. Climate change has changed everything.

Everyone knows now that late-stage capitalism and all it represents, with its 100 corporations eating up the world, is the real fox in the hen-house, not the unfortunate socially disadvantaged, bled white by rigged systems.

It’s time for new ideas. Everyone knows this now. It’s a whole new game. But Varadkar is intent on stringing out the old game to keep himself in a job. Brexit has been useful in this respect. The longer that goes on the better for Varadkar.

He has two years in which to call an election and earn a valid public mandate, rather than the business arrangement that has made him taoiseach.

It’s entirely up to me when to call the election, he tells Mr Tubridy, with barely concealed pride. Like the privileged kid who owns the football and gets to call time on the game.

All Is Well on Planet Varadkar (Eamonn Kelly)

19 thoughts on “The Privileged Two”