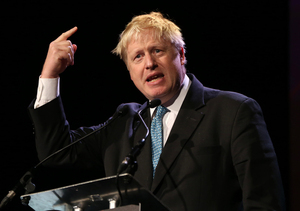 During his speech, Mr [Boris] Johnson {former British Foreign Secretary] said the answer was to “get back in the cab, turn around and face the real obstacles”.

He said Mrs [Theresa] May’s main concern should be to have the backstop on the island of Ireland removed and to use the transition period to come up with a new trade deal.

He added: “She can go back to Brussels, and she should go back to Brussels and say that the British House of Commons doesn’t accept the democratic consequences of the arrangement you have imposed in the form of the backstop. It’s got to come out.”

19 thoughts on “Backstop That”