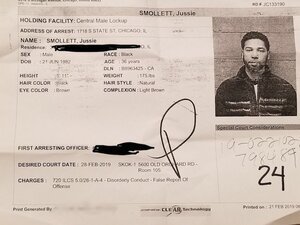 Mughsot and booking information for American television star Jussie Smollett, who has been charged with staging a fake racial assault on himself by two Trump supporters involving bleach and a noose.

The 36-year-old actor is suspected of paying two Nigerian brothers to stage the attack. They are both co-operating with the investigation, police say.