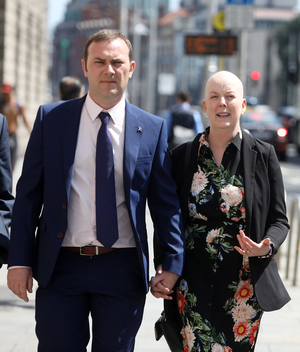 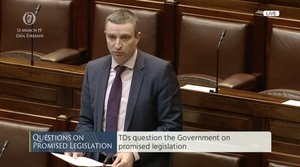 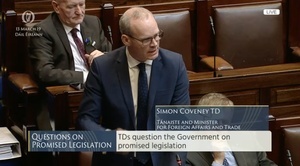 Fianna Fáil TD Niall Collins raised the nature of the questions put to terminally ill Ruth Morrissey, who has cervical cancer, by the HSE’s legal counsel in the High Court yesterday.

Ms Morrissey, who broke down in the witness box yesterday, is taking action over an alleged misreading of her smear slides in 2009 and 2012 taken under the CervicalCheck screening programme.

Yesterday was the 27th day of Ms Morrissey’s action.

Mr Collins said that last May, following Vicky Phelan’s High Court action, Taoiseach Leo Varadkar told RTÉ’s Six One News that, in relation to women affected by the CervicalCheck scandal, “what we propose to do is to offer mediation in every case, so that women can avoid having to go to court and the trauma of a court hearing”.

“Now late on Monday, Ruth Morrissey was summoned to the High Court for yesterday, where she was subjected to a pretty robust and traumatising cross-examination by counsel for the HSE.

“Her family are quite upset about it and I think it draws into question, seriously, the commitments which were given to the women by the Taoiseach, namely that mediation would be offered. So what I want to ask you is: are you the happy that the mediation process, which the Attorney General was to counsel the State Claims Agency, to enter into a meaningful way. Are you happy that that is happening?

“Are you satisfied that the women who have been failed in this regard are being treated sensitively and properly by the State Claims Agency and that proper mediation process is being engaged in?”

In response, Tánaiste Simon Coveney said he acknowledged the “difficulty and the heartache” that Ruth and her family, and that of the other women, have had to go through.

“The State’s only objective is to support those people as best we can. To try to keep people out of court and to assure that there are settlements that are fair, available to the women and families involved.

“That is why yesterday, on Leaders’ Questions, I announced the detail of the ex-gratia scheme which is being set up now under the chairmanship of a retired High Court judge. So that we can ensure that families and victims and individuals get the support that the State wants to make available to them.

“I don’t have the exact details in relation to the legal arguments around this case, deputy, so I’m slow to comment on a court case but I know certainly the policy direction from the Government is very clear here, to the State Claims Agency.

“We want to try to keep these cases out of court, so that people don’t have to go through what is an adversarial court system in relation to assessing the extent of claims and compensation.”

Ms Morrissey, from Limerick, was diagnosed with cervical cancer in 2014 and a recurrence of her pelvic wall cancer was diagnosed in February 2018.

Ms Morrissey and her husband Paul Morrissey have sued the HSE and the two US laboratories – Quest Diagnostics and Medlab Pathology Ltd.

‘I Didn’t Think I’d Be In This Position’

‘Laboratories Said There Was Now No Imminent Risk’

The “Extraordinary Hold” Foster Family Had Over The Health Board

2 thoughts on “‘A Traumatising Cross-Examination’”