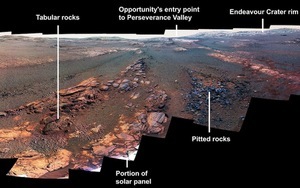 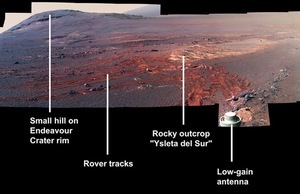 A 360 degree panorama of Perseverance Valley on Mars taken last year by the Opportunity Rover. To wit:

The scene is composed of 354 individual images recorded through 3 different colour filters by the rover’s panoramic camera from May 13 through June 10, 2018. A few frames remain in black and white at the lower left though. Those were obtained through only one filter just before a dust storm engulfed Mars in June 2018, ultimately ending the solar-powered rover’s trailblazing 15 year mission. Just right of center, the annotation identifies Opportunity’s entry point to Perseverance Valley along the Endeavor crater’s western rim. The rover’s tracks begin there, extending from over the horizon toward the far right and its final resting spot on the Red Planet.

8 thoughts on “How Red Was My Valley?”