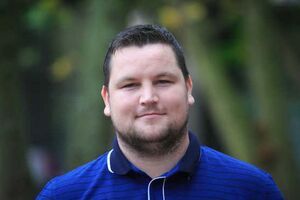 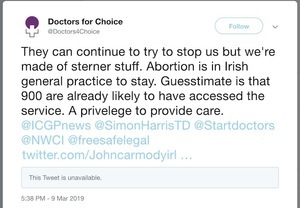 From top: John Connors; Tweet from ‘Doctors for Choice’

I Had the honour of hosting an extraordinary post-show Q&A with actor and writer John Connors in Clontarf last night.

The passionately articulate audience discussed class, ethnicity, gender, and mental and physical disability. It was remarkable to have uninhibited conversations about such taboo subjects.

They also touched on a subject that nobody is allowed to question anymore. Abortion.

There are many reasons why a woman or couple might feel the need for an abortion but this is also a subject that caused such rage-fueled hatred in so many egalitarian activists that they wanted John wiped off the face of the earth. Or, at the very least, stripped of his thoughts, his voice and his livelihood.

Later we talked about the avalanche of celebrities who fell over each other to be front row centre on the abortion train. They couldn’t get enough of it. Horrific stories of young girls impregnated by their scumbag fathers and rape victims left in crisis by their scumbag rapists were the only conversations allowed to be had.

Anyone who questioned if ethnicity, gender or mental or physical disability would be grounds for termination were labelled right-wing, misogynistic, fear-mongering extremists.

No doubt some will insist that it’s done. Get over it. Move on.

And Government leaders who let women die of cervical cancer consider themselves feminist icons. And 450 lives per month are considered products for pharmaceutical companies.

At the time, John Connors spoke up. His questions have been answered. Ethnicity, gender and physical or mental health are perfectly normal grounds for abortion. As is anything else.

We even refuse to administer pain relief to late-term aborted babies on the grounds that it may, “shame the mother.”

Where are the celebrities who brayed so loudly and so proudly back then? The ones who labelled anybody who spoke up as right-wing, misogynistic, fear-mongering extremists.

Where are these wailing accusors? These heart-on-the-sleeve liberals. These egalitarian activists. These suddenly silent hypocrites.

‘UN Decision Not Binding On Ireland’

53 thoughts on “Made Of Sterner Stuff”