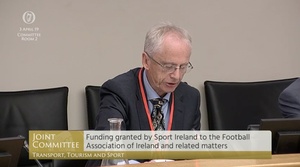 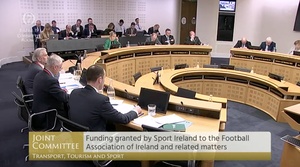 An hour later than expected…

CEO of Sport Ireland John Treacy has started to give his open address to the Oireachtas sports committee in relation to the Football Association of Ireland.

It follows revelations in The Sunday Times in recent weeks that the former CEO of the FAI John Delaney gave the FAI a “bridging loan” of €100,000 in 2017 – a loan Sport Ireland said it new nothing about – and that the FAI paid €3,000 a month in rent for Mr Delaney for several years while he was earning €360,000.

In his opening statement, Mr Treacy said the FAI has not sufficiently explained the circumstances of Mr Delaney’s loan and, as of yesterday afternoon, the FAI had not responded to a second letter from Sport Ireland in which it sought answers.

However, it did receive a letter late last night while a copy was handed into the SI office this morning.

Previously: ‘The FAI Letter Did Not Sufficiently Explain The Circumstances Of This Loan’

Sport Ireland CEO John Treacy has said after his group did not receive a letter from #FAI over #Delaney loan for a fortnight, it then received the letter late last night, with a copy handed into the Sport Ireland office at 10.40am today – just four hours before Dail meeting.

Treacy reads out letter, before saying it again does not give any explanation for the €100k #Delaney loan to the #FAI, the exact circumstances of its repayment and why this information cannot in the FAI’s view be released at this stage other than to refer to the Mazars report.

Treacy: “We will be writing to FAI probably in next day or so, expressing disappointment in timing of letter, secondly we will be raising the context of the letter which falls far short of both requests of Sport Ireland.
The letter does not give any explanation.” #delaney #fai

Mr Treacy read the following from the letter Sport Ireland received from Donal Conway, president of the FAI:

“I note the concerns expressed by Minister Ross with regards to media reports and your wish for clarification as to the circumstances of the short-term loan by the then chief executive to the association.

“The association has engaged Mazars to carry out an independent review of all matters in this regard.

“When that review is complete I will write to you in more detail in relation to the circumstances involved as requested.

“In the meantime, the association will be happy to meet with you or your officials to review the association’s financial records in relation to the use of State funding.

“As you are aware from our statement of March 30, 2019, the association has engaged with the Office of Director of Corporate Enforcement and it’s dealings with their inquiries.

“The association has established a committee which I am chairing, to work with our external advisors to urgently address the matters of concern. 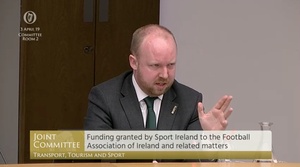 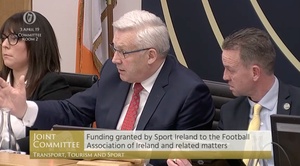 Fine Gael TD Noel Rock (top) said – following Mr Treacy’s opening statement, and his reading of the FAI’s letter above – that he wished to ask a question of the chair of the committee Fine Gael TD Fergus O’Dowd (above), given the “extraordinary letter” received by Sport Ireland.

However, Mr O’Dowd said the committee had spent an hour fixing the protocol of the meeting and wouldn’t allow Mr Rock ask his question. 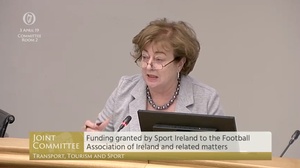 “You seem to take a very soft kind of approach with the FAI, work with them if you like…but it doesn’t seem to be reciprocated and certainly this response [letter] would certainly give us this impresssion – this is one-way traffic.

There has to be some sanction that you wil impose or else this behaviour will continue.”

“We were extremely disappointed with the letter. We have the right to ask about terms and conditions about funding and this letter provided no information whatsoever.”

“We have provided 50 per cent of funding to the FAI already this year, right. We have asked for this information, we will be asking again, tomorrow.

“If we don’t get a response, we have a board meeting on Tuesday and the board will discuss it and it’s a matter then for the board to decide what action needs to be taken.

“If they’re not compliant with the terms and conditions of funding, it will require the board to look at what actions it can take.”

Asked by Mr Rock if this points to “serious cash-flow issues”, Mr Treacy said: “Yes, it does.”

Asked if it raises flags in Sport Ireland, Mr Treacy said Sport Ireland is aware the FAI is “carrying large debt” but he said the “sustainability of the organisation is still moving forward”.

Mr Treacy said: “Debt has decreased but it is a concern.”

Asked if Sport Ireland sought to meet the FAI to discuss the cash-flow issues, Mr Treacy said: “We would meet regularly with the FAI”.

The committee heard they last met with the FAI in December.

Mr Rock asked Mr Treacy if that struck him as “peculiar” or as a “serious cash-flow issue” within the FAI.

Asked if Sport Ireland knows whether the FAI has sought further loans, Mr Treacy said that Sport Ireland has asked FAI if there is any other issue that has taken place or likely to take place but those questions weren’t responded to by the FAI.

Mr Rock said the letter that Sport Ireland received this morning is “frankly insulting to your organisation”.

Mr Rock then asked: “Does the more recent disclosure undermine your level of satisfaction for the affairs and audits of previous years?” 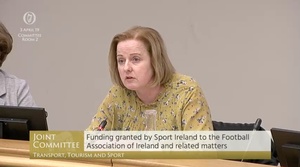 “We protect the investment that we make in the FAI and I’ve outlined the verification of that countless times. That’s the piece that we do. The board of the FAI regulates and oversees the corporate governance of the FAI.”

Asked if he ever thought it was “strange” that “the CEO of a sporting body” [Mr Delaney] would earn more than a Taoiseach, Mr Treacy said: “Yeah. I did think it strange.”

He said he didn’t raise it with the FAI as it was a “matter for the board [of the FAI]”. 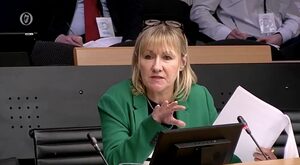 Asked by Sinn Féin TD Imelda Munster if he has confidence in the board of the FAI, Mr Treacy said:

“Where we are at the moment is this: we’ve asked questions and we haven’t got answers and that raises serious concerns within the executive and within Sport Ireland.”

Asked the question again, Mr Treacy paused for a number of seconds to consider his answer before saying: 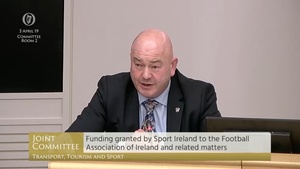 Fianna Fáil TD Kevin O’Keeffe – who secured two World Cup tickets, which he paid for, via Mr Delaney – asked if the €100,000 loan would be a high or medium priority for Sport Ireland.

Mr Treacy said it’s a “very high-priority” matter for Sport Ireland and the body is awaiting the response from the FAI.

Mr O’Keeffe then asked if the loan seems “illegal” to Sport Ireland.

“If I walked out to Kildare Street there straight away and walked across the street and I got knocked. It’s wrong because I didn’t look left and right but it’s not illegal to walk across the street…What I’m asking is, this €100,000 – obviously it looks politically incorrect, you know, but was it.. does it seem to be illegal, at the moment, what happened?”

Mr Treacy said Sport Ireland has asked about the circumstances of the loan because they didn’t know anything about it.

(Oireachtas webcasting is provided by the Houses of the Oireachtas Service, in association with HEAnet, Ireland’s National Educational and Research Network)

36 thoughts on “Kicking Off”