The Companies Registration Office received a report from auditors Deloitte this afternoon, saying that that the accounts of the FAI are not being properly kept https://t.co/iE7pWhS7Jv 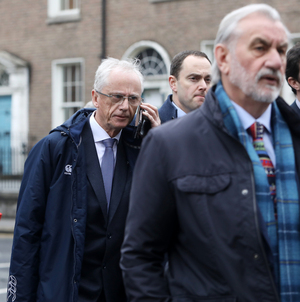 Senior members of Sport Ireland will go before the Oireachtas sports committee to discuss the Football Association of Ireland, its funding, and matters concerning its governance again.

Ahead of today’s meeting, last night the FAI sent a letter to the same committee in response to questions that the committee felt weren’t answered when FAI senior members went before it last week.

The letter was signed off by interim CEO Rea Walshe.

In relation to a question on the FAI’s auditing process and whether auditors have access to all books and records including records of cheques, the FAI said:

“As part of the audit process, we are obliged to provide and do provide access to all the books and records of the Association for the financial year.”

Asked if the FAI has an active Tax Clearance Certificate, the FAI said:

“The association holds an active tax clearance certificate, which confirms that all current and prior tax affairs are in order.”

In response to a question about the FAI’s overdraft and specifically: why there is a difference between the overdraft as per the 2016 financial statement and the current overdraft, the FAI said:

Asked why the €100,000 loan given by former CEO John Delaney to the FAI was not included in the Monthly Financial Accounts, the FAI said:

“The monthly accounts presented to the Board and Finance Committee contain the Profit and Loss account which would be the normal way to assess the up-to-date performance of the business in relation to variances to budget. The €100,000 loan was accounted for in the balance sheet. Balance sheet accounts are reviewed by the finance team on a monthly basis. The transaction did not affect the Profit and Loss account of the Association.”

“At the time the association was provided with the €100,000 loan, it had utilised all available funding across its bank accounts.”

Asked what was the category of payment and payment terms of the creditor [who sought payment just before the loan was given to the FAI], the FAI said:

“We confirm that this information is commercially sensitive.”

“It was lodged into our deposit account, which is the account the majority of our receipts go into. This is the bank account listed on our invoices. An internal transfer from this account to our main current account, which holds the overdraft facility, was then performed.”

“The €430,000 related to the CEO’s salary and the honorarium to officers of the board.”

Previously: The Nation Holds Its Breath

3 thoughts on “Questions And Answers”