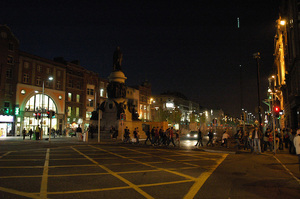 “Walked through Dublin city centre earlier this evening. I was having a few medical tests done earlier in the day. Sadly the town I’ve known and loved all my life has been reduced these past few years to a horrible, intimidating drug-infested kip of a place.

And it keeps getting worse. There’s still a handful of great pubs where you can enjoy a pint (albeit in some places at exhorbitant prices – €5.90 for a pint of stout ffs in one place we called into! So I don’t go to too many of them lately.)

But the city is now becoming more sinister and more nasty than I’ve ever known it to be in the past. Sadly this city I once loved is now controlled by gangs. It wasn’t how I knew it to be years ago, as I walked back to where we were staying tonight with some food from a local takeaway.

Even a young garda asked me if I knew exactly where I was going. I agreed with him when he described the city centre as an incurable kip. He looked no more than twenty. When I was twenty, this city was a great place. Sadly that’s not the case anymore. But we still had a great evening and thankfully the weather was beautiful.”

Is Gareth’s mournful outpouring simply a reaction to a bad night in the city and a bit Brennan’s Bread with its, ‘ah it’s not like the good ole days’, or has our capital city declined in cultural value, safety and general conviviality because of increased crime and addicts?

A close relative of mine, more Dub than I, can’t wait to get out of the place due to the ubiquity of addicts where he works in Dublin 1.

I know several people agree with him, but triple that who don’t and who left their Dublin roots for the commuter belt semi-ds in Meath and Kildare during the housing boom, craving to come back now that the kids are teens and they have more social time.

Tourism Ireland reports that 11.2 million overseas visitors came to Ireland in 2018, an increase of 6% from 2017 and many of them spent at least two days in Dublin. Which means we are top providers of a cultural experience and a pleasing gateway to the rest that the country has to offer.

The swarms of hen and stag parties that visit Temple Bar during the spring and summer season contributes to a healthy tourism industry and they don’t cause any grief except push the pint price up in those contained zones – which Dubs nimbly avoid and proceed to their prized spots.

Most Dubliners wouldn’t dream of living anywhere else in the country, even for the four bedrooms, horse stables, chicken coop and hectare of landscaped garden they could gain in exchange for their city crib.

There’s a buzz in town, and you get used to its traffic and rough neck and enjoy its village-like eccentricity.

Granted I’m a twice returned emigrant so without lyrical-waxing about it I still think the city rocks from a global perspective because of its small size, recreational offerings and touch of madness.The diversity of pursuits at the weekend for beach, city culture and mountain walks would want you wish for more weekends.

So I am curious; is Gareth right about Dublin being a kip or just doesn’t get the joys of city life? And if you do think it’s a kip, to paraphrase Junker to Farage in the EU Parliament in 2016, “Why are you here?”.