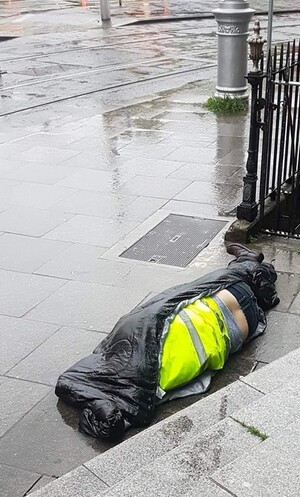 The image taken in central Dublin and shared on Facebook today came with the caption ‘Is This the Kind of Ireland We Want?’

Facebook has arguably become the main public forum for bursts of moral outrage, like the hate sessions in Orwell’s 1984.

The idea from the point of view of the participants is to be seen to publicly express energies in keeping with the herd. From the government’s point of view, it is a controlled outlet for public expressions of anger.

Today’s outrage was the photo of a homeless man in a Dublin street, his head shoved into a drenched sleeping bag and his trousers down around his hips leaving his backside bare to the rain.

The expressions of anger ranged from castigating the government to one that caught my eye in particular saying that the Irish had lost their Irishness.

This is a brilliant encapsulation of the high regard many Irish hold the Irish nation in, coupled with the dawning realisation that we may not be quite as perfect as that high regard has led us to believe. We could even be worse.

I subscribe to the view that we are worse, though not unusually bad in a wider humanitarian scale of human failings.

The picture of the homeless man that I saw on Facebook came with the caption Is This the Kind of Ireland We Want? Well, clearly it is. If we didn’t want it, we wouldn’t have it.

The truth is, this naked disparity in wealth and social standing is exactly the Ireland that many, if not the majority of Irish people, do want.

The Irish were always fond of getting up by putting others down, and this is the logical conclusion. That sadistic streak instilled by the clergy drives the whole sorry mess of austerity Ireland more effectively than any bunch of Nazis might have done.

You deserve it. You’re a sinner. Look at you. If you had worked hard and got up early and did what you were told and conformed to power and authority the way the rest of us do you wouldn’t be in that state.

You’ve only yourself to blame. You made your bed now lie in it. It’s all your own fault. You needn’t be lookin’ for handouts from me. And so on. We all know the song.

Another commenter said that the situation was outrageous and that he wasn’t going to vote for any of them, which, given the way power is placed in a democracy, is a vote for them.

Abstaining is not a vote against the ruling power, it is simply removing yourself from the count, a count where the ruling party get every voter out to the polls. You can’t win in a democracy by not voting. In fact, you lose.

Votes count and the Irish people voted for the policies of Fianna Fail and Fine Gael which included the policy to use homelessness as a tool to get the economy revved up again and get the banks back in business.

Overall, the method has been approved of by the majority of Irish people.

Fine Gael are a couple of points up in the latest polls. The elites are not hurting.It’s the people down the scale who are hurting and the lack of concern for them is an expression of Irish authoritarian heartlessness.

This itself is a legacy of church education; combined with a modern laissez-faire sensibility of corporate Darwinian economics, courtesy of the good old US of A, where corporations, seeking to create markets, have been known to deliberately hook people on opiates in a gesture of fuck-youness that was previously only ever seen in dystopian sci-fi movies or bleak concentration camp dramas.

So, for many Irish people, seeing such abject destitution as represented in today’s outrage photo, makes them feel “successful” on the one hand, in line with the American model; and virtuous on the other hand, in line with the Irish catholic authoritarian model of seeing their “goodness”, in the form of obedience, paying off and keeping them safe.

Safe, that is, from the other Irish who seem relish the sight of people nose-diving into personal disaster. Ye had it comin’. You’ve only yourself to blame. You needn’t come lookin’ for handouts from me…

Eamonn Kelly is a freelance journalist. 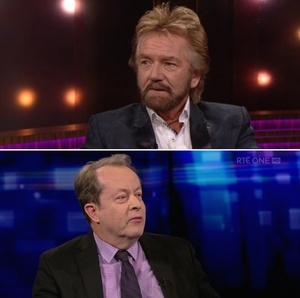 17 thoughts on “Getting Pissed On”