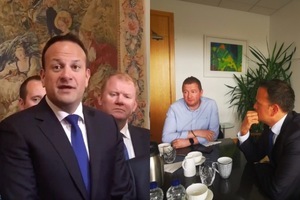 Taoiseach Leo Varadkar says there’s no evidence to back up claims that dead bodies were left decomposing on trollers at University Hospital Waterford pic.twitter.com/wuWYNlbUNd

Yesterday, while in Waterford, Taoiseach Leo Varadkar commented on the mortuary in University Hospital Waterford.

His comments largely mirrored a press release that went out on Monday night via the PR company Heneghan PR where former Government press secretary Eoghan O’Neachtain is director of public relations.

The press statement said there was “no evidence” to support reported claims by four pathologists about the conditions of the mortuary – following on from reports by Darren Skelton of the Waterford News and Star.

“You know, I suppose I don’t know for sure what the truth is. We have a letter from a number of consultants last October, alleging that there were dead bodies on trollies decomposing, however, no evidence has been brought forward to support that. The coroner was unaware of it, the funeral homes asked were unaware of it.

“There were no incident reports from any staff and also there were no complaints from any families so it’s definitely a strange story. I don’t know if those claims are true or not but it doesn’t seem that there’s any evidence to support them.

“Certainly those who made them haven’t put forward any evidence.”

Following on from this, Mr Skelton had the opportunity to interview Mr Varadkar about his comments one to one…

Darren Skelton: “Our paper [Waterford News and Star] was the paper that broke the story about the mortuary and I saw your response to it today in the Granville [Hotel]. And the response from the South/South West Hospital Group last night. Which is concerning to me because there’s four professional pathologists in the hospital who put their reputations on the line by signing that letter back in October.

“And the insinuation now seems to be from the hospital group and reiterated by yourself today that this story seems to be, in fact, untrue.”

Skelton: “Can I ask you, are you aware of an email that would have been sent from one of those pathologists to Gerry O’Dwyer [CEO], of the hospital group, in 2017? Was any reference made to you at all about that?”

Varadkar: “No, like, I’m not aware of any particular correspondence. So, obviously, on this particular issue, there’s a dispute about the facts between the consultants on the one side and the hospital management, the coroner, the funeral home directors and others on the other side. But the simple, basic principle that you apply in any dispute is if a person is making an assertion that they produce evidence. That’s not unreasonable.”

Skelton: Of course. And the hospital group last night said that they didn’t receive any incident report from any pathologist. But that’s untrue because, and I have seen the email, of a very detailed and quite disturbing report that was sent to Gerry O’Dwyer in January 2017.

“So by that logic, the CEO of the group saw the report, which outlined a particular incident involving somebody, a vulnerable person, and a body, that had to be brought to another part of the country because of the restrictions in the mortuary.

“The CEO of the hospital group saw that email, acknowledged it, reacted to it and then sanctioned a statement last night saying that they never received any incident report. To me, I’m not going to go as far as to say that it’s a lie but it’s certainly inaccurate and certainly I think ill-judged – to send out a statement saying they never received any incident report.”

Varadkar: “Yeah, you know, like, I haven’t seen any of this correspondence…”

Skelton: “I appreciate that…”

Varadkar: “And it would be wrong for me to, you know comment on it, but certainly the impression that was created last week was that, it was a regular, ongoing occurrence – that bodies were left on trollies, that they were decomposing and it appears now that the truth is somewhat different to that. But the most important thing…”

“But here we have a situation where suddenly the spotlight is put back on the pathologist who are only trying to do…I mean we have a mortuary that has the capacity for six bodies in a capacity of 520,000 people. This was acknowledged by the HSE in 2003 and here we are in 2019 and nothing has been done about it.

“Nothing has been done on this project since 2015. I’m sorry, I need to ask a question, but what I am going to ask you is: are you…”

Varadkar: “Just so there’s no doubt, I’m not blaming anyone here.”

Varadkar: “My interest is in making sure that, you know, people get the services they should get and that people are treated with dignity whether in life or death and as regards the new mortuary, planning permission has been secured and…”

Skleton: “I’ll just ask one question before I hand you over to Dermot [Keyes, of the Munster Express] on the next topic. I issued a Freedom of Information request to access this letter and the hospital group said it wasn’t in the public interest. Would you agree that the conditions in the mortuary are not in the public interest?”

Varadkar: “How can I? How can I answer that without knowing for sure what the facts are?”

Skelton: “But you know what the contents of the letter are? And you know…”

Varadkar: “I haven’t sent the letter.”

Varadkar: “I know the reports that I’ve seen in the newspapers on foot of it which implied that, you know, this was a regular occurrence, that there were bodies on trollies that were being left to decompose but evidence hasn’t been…”

Skelton: “If you don’t mind me saying so, I think even you’re describing ‘bodies on trollies’, there’s a certain element of flippancy to it. Because like..”

Varadkar: “Nothing flippant about it whatsoever. It’s macabre.”

Skelton: “It absolutely is. But surely you must understand that if there’s only room for six bodies in a mortuary – in a population of 520,000 – you surely have to acknowledge that, you know, maybe, it was actually happening on a regular basis.

“And people who go into a mortuary, they don’t make complaints, because they don’t know what the norm is.”

“Anyone could make an incident report on it. Families regularly go in there to identify bodies and I understand that there are no complaints for family members. Funeral home directors know about these things but, you know, it’s not for me to adjudicate on…”

Varadkar handler: “So if we want to spend six minutes on a question, we won’t get through more than two questions.”

Varadkar: “What I will say is that nobody doubts that the mortuary needs to be replaced. Planning permission has been secured for it and now it’s going to go to tender. And, in the meantime, the interim solution, I understand, is being provided involving additional refrigeration.”

Skelton: “Taoiseach, I think we both know that if that news report wasn’t released last week, this would not have been escalated. And like the scoliosis thing, it just seems like nothing can get done unless it’s reported in the media…”

They are not looking very hard. I just found this in the last few mins from 2009 https://t.co/odc70E7Fi0 pic.twitter.com/VB4n0BiMli

The IHCA said: “The response by Government to question the validity of these concerns rather than tacking the issue in a much more timely manner is disappointing.” 2/2 #mortuary #Waterford 2/2

‘I Didn’t Want To Be Calling Any Staff Member Dishonest’