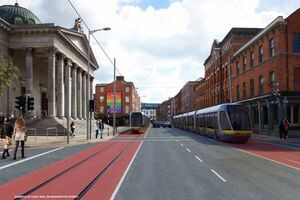 From top: Washington Street, Cork as it would appear under plans for a Luas-style rail system contained in the Cork Transport Strategy; Dan Boyle

So we are to have a Cork Luas (CLUAS), or maybe not. Another launch of a big spending plan spread out over a significant time span, by a government that seems intent to be the cast of the latest remake of ‘Brewster’s Billions’.

Another spin-dominated presentation that is as much about business as usual, than it is about any Brave New World of transportation.

The reasons to be cynical? This plan, despite its PR gloss, is made from the same template of all previous plans that have preceded it.

The biggest tranche of spending will continue to go to the construction of new roads, with payments front-loaded ahead of any public transport options.

The shining bauble of a CLUAS system is presented with a number of caveats. Much will depend, we are told, on whether hoped for demographic changes occur, and in whether other public transport (bus) initiatives will have taken up the slack by then.

When is then? 2031 apparently, the date it projected to begin a CLUAS system. To be finished for operation by 2040.

Twelve years from now, the twelve years that we need to change tack to avoid climate change becoming irreversible. Twelve years when we should be prioritising public transport over roads only initiatives. Après le déluge CLUAS.

As with most spin presentations the main emphasis has been out on the headline figures. €3.5 billion is to be spent over a twenty year period on this plan. This averages out at €175 million each year, a not insignificant sum.

Except that spending won’t be averaged on an annual basis. There will be very little upfront expenditure with this plan, as has been the case with all previous plans.

Early expenditure will go on scoping exercises. These will rarely be in house with consultants being brought in to reinforce the already held biases of the National Transport Authority.

Future expenditure, the longer implementation gets delayed, will see more of the anticipated budget being eaten up by construction cost inflation. Either that, or the costs get layered on. Much like we are experiencing with the National Children’s Hospital.

The belief is that new road announcements are what pleases the punters. The truth is rather different. Most voters would prefer the proper maintenance of the existing road network, especially pavements.

There is a notorious double standard in transport planning. Asphalt carpets designed largely for single user vehicles, which operate under capacity for decades after construction, are created under a build it and they will come philosophy.

Public transport infrastructure always seems to be assessed on justifying its use on existing, not future, population load.

The basis of infrastructure spending should be to provide now to create development, not to respond later, and inappropriately, try to meet uncatered for needs.

Public transport initiatives should now become the overwhelming focus of transport planning. Such projects should be prioritised for soonest possible implementation.

Brian Nolan, as Myles na gCopaleen, once wrote that the Irish roads programme was to build a series of parallel roads, with the construction equipment being left in situ, in the yet to be completed lane.

That was satire. Current transport planning thinking, and how it been historically informed, is much worst than that.