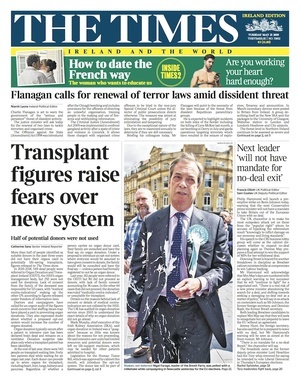 Am just gutted for all the brilliant journalists at Times Ireland. Some of the best reporters in Ireland work (and got a start there). They broke a huge number of seriously important stories and their business & sport coverage were consistently excellent.

Awful news about the Times Ireland edition. The excellent team of journalists and editors achieved so much in a short space of time. This is a bad day for journalism in this country. https://t.co/PKalHwgMrK

RTÉ News understands staff were told at a meeting today that all but three positions at the paper were to be made redundant and that those three jobs had to be reapplied for.

A print version of the Times Ireland was launched in June 2017 after a digital-only launch in 2015. The publication will return to a digital-only edition. The Sunday Times in Ireland will be unaffected.

Incoherence, Mistrust And A Lack Of Synergy