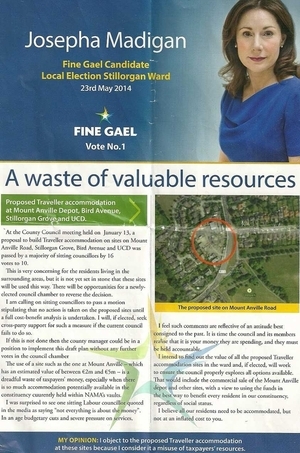 The high farce of Maria Bailey swing claim has brought focus on the previous shady dealings of her father, Councillor John Bailey, as reported in these pages.

Holding other politicians responsible, such as Charlie Flanagan, for the antics of their fathers – antisemitism in the case of Oliver J. Flanagan – would be unfair. But when we observe a continuity in attitudes and approaches across generations this is worthy of commentary.

Given Ireland’s tribal political allegiances, it may come as a surprise to learn that Minister for Culture, Heritage and the Gaeltacht Josepha Madigan is the daughter of a former Fianna Fáil councillor, the late Paddy Madigan, a Mayo-born solicitor who made his home in south Dublin, and later stood as an independent candidate.

His Irish Times obituary from 2014 recalls:

In 1994 he publicly wrote to then Taoiseach Albert Reynolds to resign from Fianna Fáil and stood successfully as an Independent opposing the residential property tax which he said Charles Haughey had promised him the party would abolish.

It was, he said at the time, “the most obnoxious tax ever levied on the Irish people”. In his Blackrock, County Dublin ward, he claimed, 80 per cent of homes were over the tax’s £75,000 threshold.

His earlier litigation over the issue had not succeeded, either in the High Court which ruled against him in November 1983, or the Supreme Court which likewise rejected his appeal the following November.

But he was successful in 1981 in challenging the constitutionality of the Rent Restrictions Act and freeing landlords significantly from the constraints of rent control.

That 1981 Supreme Court decision to declare rent controls unconstitutional has been instrumental in the inequitable wealth transfers from income earners to property owners over decades.

Historic resistance to property taxes, led by Madigan Snr and others, has also maintained these taxes at comparatively low levels, making ‘bricks and mortar’ the favoured investment for the upper middle class, to the enduring difficulty of renters who have contended with spiralling rents in overheated markets ever since.

According to David McWilliams, the richest 5% owns over 40% of national wealth, 85% of which is held in property and land. Last year just €500 million out of total tax receipts of approximately €50 billion, derived from land or property.

It is unclear the extent to which Josepha Madigan plays a direct role in framing the government’s housing policy – which is failing at a fundamental level over ten thousand homeless – but as a member of the cabinet she certainly shares collective responsibility for the government’s position.

The government’s entrenched sympathy with landlordism was set out by Eoghan Murphy in a speech to the Dáil last December:

“We have to be very careful in interfering more than we are at the moment. We have to make sure that we are not placing extra burdens on these small landlords.

And we have to make sure that we are not prohibiting someone from selling a property that they own when they might need to sell that property for perfectly legitimate reasons in their own lives.

They may not have the money to re-compensate the person living in the property at that point.”

Naturally, Josepha Madigan cannot be held responsible for her father’s historic role in preserving a virtually free hand for land owners, including the owners of multiple properties over decades, but her political career suggests a similar ideological resistance to interfering with property rights.

This would appear to extending to ensure that persons who might lower the price of property in a given neighbourhood are excluded.

In the 2016 General Election she successfully unseated her Fine Gael colleague – and long-time foe of Leo Varadkar – the former Minister for Justice Alan Shatter, to become one of only three TDs for the new Dublin-Rathdown constituency.

Prior to this, as a Fine Gael councillor, Madigan had campaigned to deny Travellers accommodation in her ward.

Thus, the first paragraph of a 2014 leaflet issued in her name described a proposal to build Traveller accommodation on Mount Anville Hill and elsewhere, close to her constituency base, as ‘very concerning for those living in the area.’

Later paragraphs go on to claim the purchase would be a waste of money, advocating a cost-benefit analysis, and making vague reference to NAMA properties offering alternative sites.

Despite her denials, the document reveals Madigan as saying the presence of Travellers in the neighbourhood would, in and of itself, be “very concerning”, for reasons we all know but are unwilling to say, and which really have nothing to do with the cost to the council of the accommodation

Her Populist strategy may have been informed by the success of another former Fine Gael TD for the area, Olivia Mitchell, who, according to Victoria White, ‘made a career out of opposing Traveller accommodation.’

On October 10th 2015, a blaze swept through a halting site at nearby Carrickmines, in south Dublin causing eleven fatalities. It was the country’s worst such disaster since the Stardust fire in 1981.

In its wake, local residents from another south Dublin estate delayed construction on a temporary halting site earmarked to house the fifteen adult and children survivors of the inferno.

This led then Minister for the Environment, Alan Kelly to comment: ‘It says an awful lot about Irish society and in a very disturbing way’. Politicians cannot be held responsible for all such attitudes, but they may legitimate their expression.

Kitty Holland described the state of Traveller accommodation around Dublin at the time:

‘On some sites, only one cold tap services eight or nine families; on another, 20 people share one toilet. Some sites are infested with rats, with children prone to infection, skin rashes and respiratory conditions.’

After a cabinet reshuffle in the wake of the resignation of Frances Fitzgerald as Minister for Justice in November, 2017, Josepha Madigan was appointed Minister for Arts, Heritage and the Gaeltacht.

In response Martin Collins, of the Traveller organisation Pavee Point commented: ‘Of course we would be concerned given her comments on Traveller halting sites a couple of years ago.’

Fairly or otherwise, Travellers are often depicted as a menace to settled communities, but the State recognises their separate ethnic identity and is committed to vindicating that nomadic existence.

The resistance of local councils to building suitable halting sites over decades, at the behest of numerous politicians, has brought squalid conditions that may explain anti-social behaviour, and brought the prospect of disasters such as Carrickmines.

The absurd Maria Bailey case is mostly a distraction from the ongoing negligence of this government, but it at least allow us to discuss the dynasties that operate at the heart of our political system, dominated by two, increasingly undifferentiated, parties.

49 thoughts on “A Chip Off The Old Block”