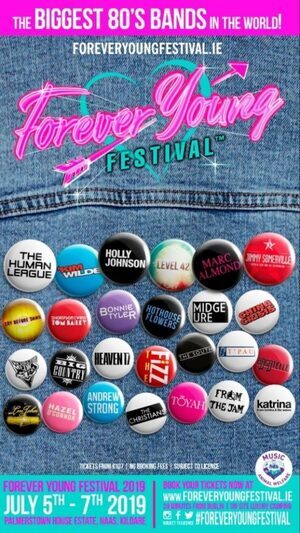 I (‘sheet Music Editor) am offering you the chance to win TWO (count ’em) tickets to the Forever Young festival which takes place from July 5-7 in Palmerstown House, near Naas, County Kildare.

It’s time to dig out the shoulder pads, backcomb that big bouffant, slip on the leg warmers and spangly jewellery and party like it’s 1982.

The line-up for the weekend is ‘a veritable who’s who of the decade that they could not kill’, including The Human League, Marc Almond, Kim Wilde, Holly Johnson, Tom Bailey of the Thompson Twins, T’Pau, Level 42 (careful with that slap bass!), Midge Ure, Bonnie Tyler, Heaven 17, Big Country and Jimmy Somerville.

There’s camping at the festival ‘to suit all tastes and budgets’ and there will be regular daily return buses from Main Street in Naas, Naas-Sallins train station and from Aston Quay in Dublin.

For a chance to win two day tickets to Saturday and Sunday (not camping tickets, sorry!), just become the 80th person to correctly answer the following question:

Holly Johnson was the lead singer of which 1980s chart-topping group?

Lines will stay open until we have a winner.

A serious flaw in the competition (which was Bodger’s idea) has been detected (by TheQ47 below) that would allow a lurker to wait until the 79th entry and ninja-like sneak in and claim the 80th spot with some ease. Very sorry. I will pick a random name out of the hat at 6pm. You may also a request a suitable song by way of apology.