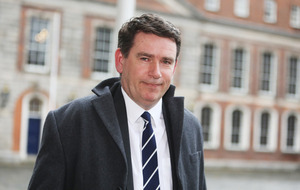 News just coming in – The Fine Gael membership in Waterford has unanimously passed a vote of no confidence in Deputy John Deasy at a constituency meeting held tonight. pic.twitter.com/xva7aSuDY8

One senior [local Fine Gael] member present at the meeting said that Mr Deasy, who has held a seat in Waterford for Fine Gael since 2002, “came in for severe and sustained criticism” from those present, and that none spoke in support of the backbencher.

“Speaker after speaker came out strongly against John Deasy and his workrate as sitting Fine Gael TD,” the member said.

A motion of no confidence was proposed by one member – not an elected representative – and seconded before being passed overwhelmingly by the meeting which was held in Lawlor’s Hotel in Dungarvan.

Speaking to the Irish Examiner this morning, Mr Deasy said that party bosses have long been aware of problems within the Waterford Fine Gael membership and have done nothing about it.

He said: “The entire Waterford organisation needs to be stood down and reviewed by headquarters; repeated warnings have been given by myself and other with regard to the behaviour of individuals in Waterford for years now.”

Tensions have long existed between the Deasy camp and supporters of Senator Paudie Coffey and Mr Deasy revealed that because of “constant bitching” at himself by members, he and his supporters had stopped going to meetings such as that held last night years ago.

“This is well beyond typical interparty, internecine rivalries,” he said.

Deasy calls for local FG organisation be stood down following motion of no confidence in him (Daniel McConnell, Irish Examiner)

“After receiving a mandate from the Waterford electorate at the 2016 General Election, Fine Gael Deputy John Deasy was appointed special envoy to the US by Taoiseach Leo Varadkar and has since been doing important work on a special visa scheme for Irish citizens.

“Fine Gael’s General Secretary Tom Curran will soon be consulting with members and elected representatives in Waterford on finalising the party’s General Election ticket for the constituency.

“One candidate, Senator Paudie Coffey, was previously selected at convention to contest the next General Election.”

8 thoughts on “Deasy And Slow”