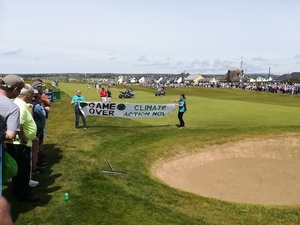 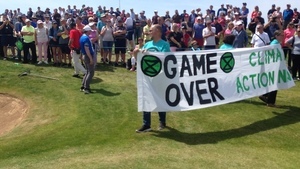 Members of Extinction Rebellion Clare who disrupted the first day of the Irish Open golf tournament in Lahinch today  say they wanted to appeal to its global TV audience to demand urgent action by the world’s governments to prevent a climate catastrophe.

At 1:20 pm, just as Shane Lowry was approaching the 18th green, the Clare-based climate activists unfurled a huge banner that read, “Game Over: Climate Action Now!”

“We disrupted the golf event for a few moments to draw attention to the unimaginable disruption to our world that is threatened due to climate breakdown. If governments do not take radical action very quickly, the result will be catastrophic extreme weather events, drought and food shortages, from which Ireland will not be spared.”

“This action is not anti-golf. We expect real golf lovers to understand. Some of the best golf courses are by the coast, so golf is the sport most threatened by climate breakdown. And golfers love the outdoors.” 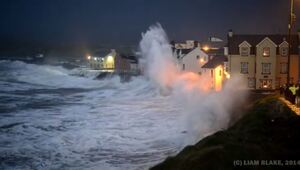 13 thoughts on “Meanwhile, In Lahinch”