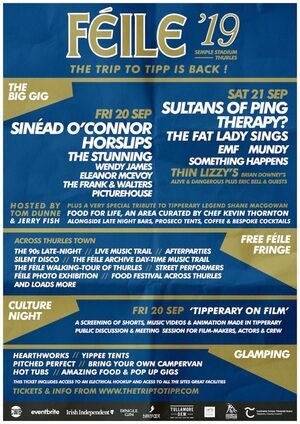 The ‘Big Gig’ at Semple Stadium is back.

The town of Thurles, as well as the original promoters MCD, and the organisers of last year’s sell out FÉILE Classical concerts, are delighted to announce that this year’s festival will now be named FÉILE 19.

Previously titled Tipp Classical, the legendary music event which runs September 20 – 22 has revived its original moniker and with a host of new events and acts added…

Those making the Trip to Tipp this September will feast their ears on music curated by Tom Dunne of Something Happens, who performed at FÉILE ’90, ’91 and ’93, and will this year also be returning to the stage alongside some of the most legendary names in Irish rock and roll, including the one and only Sinead O’Connor.