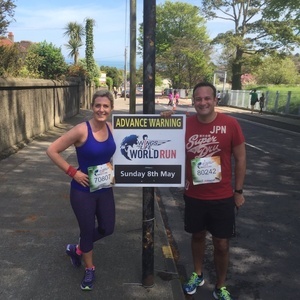 Leo Varadkar and Maria Bailey in 2016

“Deputy Bailey was injured following a fall from a swing in a hotel in 2015. She sustained painful injuries and incurred significant medical bills as a result.

“The accident happened and the injuries were real and were confirmed by medical reports. The inquiry states that it was not a fraudulent claim.

This was a preliminary step which often results in amicable resolution but the hotel did not engage with the PIAB. Minister Madigan did not deal with the subsequent legal proceedings.

These were dealt with by another solicitor in the firm who acted on Deputy Bailey’s instructions.

“She was advised that she had a ‘statable’ case. However, there were concerns that a finding of contributory negligence against her was likely and this was communicated to her on several occasions.

“Deputy Bailey signed an affidavit (linked to a personal injuries summons) that over-stated the impact of her injuries on her running.

The inquiry concludes that it is unlikely that a court would conclude that she deliberately sought to mislead as other legal documents talk about her running being restricted rather than not being able to run at all.

“There have been inconsistencies in Deputy Bailey’s account of events to me and the media that I cannot reconcile.

“It is clear to me, that Deputy Bailey made numerous errors of judgement in her handling of this matter from the outset, during and even after she’d withdrawn the case.

And her approach jars with that of a Government taking action to reduce personal injury payments, claims and insurance costs to people and businesses.

“For these reasons, I am demoting her and removing her as Chairperson of the Joint Oireachtas Committee on Housing.

“I hope this will send a clear message to other public representatives about taking such cases in future.”

The Taoiseach has removed me as Chair of the Oireachtas Committee on Housing, Planning and Local Government and I accept this decision.

“I initiated legal proceedings following an incident in 2015 in which I suffered painful injuries. I acted on legal advice throughout the process, but ultimately decided to withdraw the proceedings in an attempt to end the extraordinary media and political pressure that arose from the publication of some details of the case.

I began the process leading to the taking of this case before I was a TD, in relation to an incident that took place over four years ago. I regret very much that I took the case.

“I note that the report by David Kennedy SC has found that this was not a fraudulent claim, and that it would be unlikely that a court would conclude that there was any attempt to mislead on my part. I made no attempt to mislead.

“I recognise and regret the difficulties this issue caused for the Taoiseach and my colleagues during the recent elections. I want to express sincere thanks to members of my family, friends and colleagues who have been personally supportive of me during this recent period.”

‘He Says He Cannot Publish The Report’