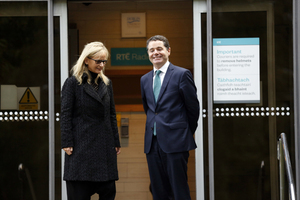 What is the Government doing with the TV licence? They have raised the prospect of charging computers and tablets while acknowledging they have no idea how to do it

They have talked about charging households, raising the memories of that pathetic and wholly unnecessary Household Charge. They have raised a number of questions to which they have no answers for.

Raising the prospect of a ‘device-independent’ charge and basing it on households is nothing new. It was first mooted back in 2013. Back then I put forward this suggestion which I’m presenting again. 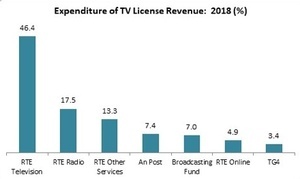 The licence fee is currently €160. The last increase was in 2008, when the fee went up by €2. There is an estimated 12.8 percent evasion rate. If there was 100 percent compliance, revenue would increase by €32.4 million. Or you could reduce the TV license fee by €20 per year.

The TV licence is, for all practical purposes, a charge on households. Over 95 percent of households own a TV, with 54 percent owning two TV sets or more. There is little distinction between high and low incomes, with an ownership rate of 97 percent at the higher end and 94 percent at the lower end.

Being a flat-rate charge, however, the TV licence is regressive. The Household Budget Survey provides data on weekly expenditure on the TV licence by income deciles. 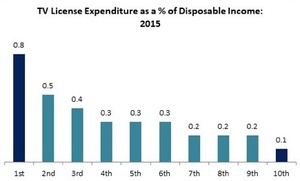 Unsurprisingly, the lowest 10 percent income group pays the most when measured as a percentage of disposable income – eight times the amount paid by the top 10 percent.

The Minister has said he wants a new broadcasting charge that is ‘fair and sustainable’. I would add another objective: efficiency.

So is there a way of administering a new charge that would reduce evasion and collection costs, capture new developments in non-TV devices, and be fairer in terms of people’s ability to pay?

Yes. Administer the new broadcasting charge as a levy on all income.

An income levy would certainly be fairer – especially if it was levied on all income: wages, self-employed income, capital income and social transfers.

Based on the Household Budget Survey, a levy of 0.25 percent would be needed to raise the same revenue. This is fractional.

Actually, it would be less because this calculation assumes that households generate all license revenue. Businesses also pay the TV license fee. However, I don’t have a revenue breakdown between households and businesses (if anyone does, please send it along). Such a breakdown would result in an even lower levy on household income.

The key is that all income – including capital income – be subject to the levy. This would keep the rate low and promote equity.

A levy on income would actually reduce the cost for average and low income households. 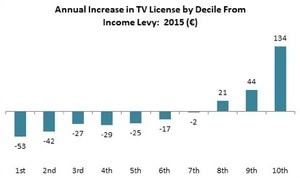 The lowest 60 percent of households would benefit from a switch to an income levy. This is an addition to the current exemptions from the license fee for recipients of the Household Benefits Package.

The top income decile would see an increase of €134 per year, which wouldn’t be too onerous as it represents 0.1 percent of income in the top decile.

And as mentioned above, the levy of 0.25 percent would be less once business TV licence revenue is factored in; especially if some of the measures mentioned here are introduced.

There are other benefits.

It would help ensure 100 percent compliance. Taxing all income at source (by the Revenue Commissioners and Department of Social Protection) would reduce the opportunities for evasion.

Expenditure that now goes on licence collection, monitoring and compliance could then be re-directed into the Broadcasting Fund which could support more independent productions and even independent on-line journalism.

Revenue would automatically rise as aggregate income increases without the need for a Government-sanctioned increase in the TV licence fee.

One problem would be the negative impact on post offices and An Post. The Irish Postmasters’ Union said the licence fee is worth €3 million each year, and claims that if it is lost it would place hundreds of Post Offices at risk of closoure.

Post offices are facing greater problems than just the loss of revenue from licence fee activity. However, to ensure that post offices don’t come under greater pressure – and to keep them going until new and innovative policies are put in place to ensure their survival – a small amount from the levy could continue to go to post offices.

This is just a suggestion. There may be downsides that would make this income levy approach unworkable or undesirable.

However, on a range of issues we need to start thinking outside the ‘this-is-how-we-have-always-done-it’ box and come up with more equitable and efficient solutions.

The Robots Are Coming

Michael Taft: Measuring The Real Worth Of Business

33 thoughts on “Michael Taft: Thinking Outside The TV Licence Box”