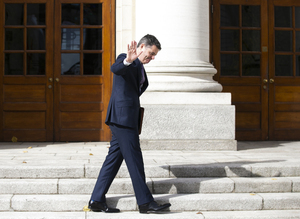 From top: Minister for Finance, Public Expenditure and Reform Paschal Donohoe TD after presenting Budget 2020 in front of Government Buildings ahead of presenting it to the Dail last week; Michael Taft

We all know that GDP, inflated by multi-national activity, is not an accurate reflection of the Irish economy. Therefore, the Government along with analysts are increasingly using GNI* as the more appropriate measurement.

If we use that measurement, then we are heading into recession, followed by sluggish growth in a no-deal scenario. The Minister didn’t once mention the word ‘recession’ except in reference to the last one. However, when using GNI* growth is projected to fall 1.4 percent next year. One caveat here – we don’t have a price measurement for GNI* (that is, GNI* is not presented in real terms).

Therefore, I have used the GNI deflator. There shouldn’t be much of a difference.
This budget is facing two ways. In a no-deal scenario, with the economy heading towards recession, the Government is putting all its counter-cyclical eggs in a €1 billion Brexit contingency basket.

These supports are intended to limit the damaging impact of a disorderly Brexit and strengthen enterprises’ ability to grow sustainably post-crisis.

However, what if that doesn’t work or comes up short – if the recession is longer and deeper than expected (the Department of Finance believes a larger impact is highly likely)?

There is little firepower left. The Government is planning capital investment at levels higher than previously published in the Stability Programme Update, but this could reflect higher prices and costs such as the National Children’s Hospital and the rural broadband network. The Government is taking a big gamble basing everything on the Brexit fund.

But if a deal is done and the economy survives the next year relatively unscathed (even with a deal, there will be an economic hit – but nothing like the worst case scenario), what are we left with?

A rather deflated budget that can be sold as either preventing ‘over-heating’ or as ‘fiscally prudent’. 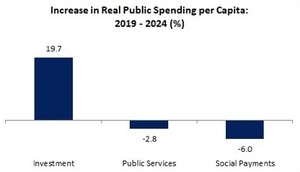 The Government projects a significant increase in investment out to 2024, but public services and social payments will be cut when inflation and population growth are factored in.

The reduction in social protection payments is particularly worrying. The Minister for Social Protection stated pension payments alone will increase by €1 billion every four to five years due to demographic changes; this doesn’t include payment increases. So what happens to the non-pension payments?

Under an orderly Brexit scenario these medium-term projections allow the Government to present itself as ‘prudent’, taking the heat out of the economy while pointing to all that good productivity stuff (i.e. investment).

But this comes at a price.

The majority of social protection recipients will see their weekly payments cut by 1.3 percent in real terms next year. Public services will be squeezed in real terms (unless the Government can pull some productivity rabbits out of the public sector hat). And minimum wage workers will have to wait on their wage increase of 30 cents per hour.

But the real news about the budget is not so much the details or projections. How many commentators used phrases like a ‘non-event’, ‘no-change’, ‘steady as she goes’ – along with more supportive comments like ‘safe’, ‘sound management’, etc.

This was a potential no-win budget given the Brexit unknown. In football terms, the Government scored an away draw.

It won’t win votes but it won’t lose votes. And that Fianna Fail was co-opted into the budget outcome through the negotiations was a big help in the Government’s sell.

This was a deeply ideological budget as pointed out by Aidan Regan. And they got away with it.

With a housing crisis, there was little blowback at the lack of housing investment; with a climate emergency there was little criticism – except from green activists – at the alarming lack of supply-side measures; with the budget surfing on a corporate tax bubble, there was . . well . . . almost nothing done or said about it.

And yet, these were the three issues – housing supply, climate change and concentration of corporate tax revenue – that the Department identified as high and likely risks to the economy.

To do nothing about them and get no criticism for it – that is an achievement. Of course, there was Brexit – the ultimate get-out-of-doing-much card.

And the alternative? Progressives by and large focused on redistributionist issues, demanding higher taxation on high-income groups and the corporate sector in order to distribute to lower income groups.

But on key fiscal questions – such as the role of borrowing, deficits, debt reduction, sustainable taxation, and public spending reform – the response has been weaker.

This is a lost opportunity – both for progressives and for the general debate. In the first instance, progressives could address those risks identified by the Department as part of a long-term risk-aversion strategy. The Government is not taking these risks seriously, not is the official opposition. We should.

But a progressive strategy would go beyond orthodox fiscal fundamentalism that dominates the debate – that it is only a matter of pulling tax-and-spend levers once a year to achieve long-term macro-economic stability.

The fact is that such stability requires layers of institutions and practices that go beyond the mere fiscal:

* Collective bargaining can help tackle low pay, precarious contracts and the gender pay gap. The outcome would be a more stable ‘wage-led’ consumption, unlike the ‘credit-led’ consumption we witnessed prior to the crash which led to growing household debt.

* Increasing workplace democracy (of which collective bargaining is a crucial element) which can promote productivity in the private sector and employee-led innovation in the public sector to drive efficiencies.

* A climate change strategy which promotes a positive vision of a society living within its ecological means (free public transport, warm and energy-efficient housing, living cities, social security during periods of transition – a Just Transition, etc.) rather than depicting climate change as a ‘sacrifice’ or a burden.

* Most of all, a shift from taxation to social insurance to create greater social security for people at key points of need: illness, family care, old age, return to education, unemployment.

Growing equality – not just in terms of income but access to services and security – is a key element in creating a fiscal policy that can promote long-term stability. These are the issues that progressives can pursue within the context of budgetary arithmetic – showing that they are not a cost, but rather necessary policies to even out the inevitable cycles of a market economy.

We have an open goal. But first we must get on the pitch and gain control of the ball. That will be a big enough challenge. 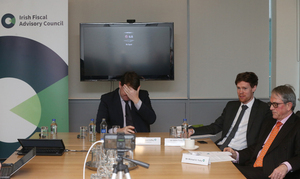 Michael Taft: Getting On The Fiscal Pitch

4 thoughts on “Michael Taft: Speaking Of The Coming Recession”