The CSO has published new data that will greatly assist in analysing wage trends. Here I just want to focus on a small selection of the data provided in Earnings Analysis Using Administrative Data Sources 2018 and Econometric Analysis of the Public / Private Sector Pay Differential 2018; in particular, high and low pay, and public / private sector pay.

A useful measurement that the CSO has produced is median pay. This measures the mid-point in wages where 50 percent are above and 50 percent below.

This contrasts with average, or mean, pay which can be skewered by high earners. For instance, in 2018:

Where are the High and Low Earners? 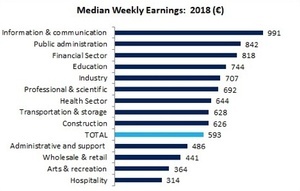 Information & communication leads the table which is not surprising. The mid point in weekly earnings is nearly €1,000, followed by the Public Administration and Financial sectors.

At the bottom is Wholesale & retail, Arts and recreation and, the lowest sector, Hospitality (hotels and restaurants). It should be noted that reduced working hours contribute to low weekly earnings.

The difference is working hours. Information & communication average working hours are 36 hours per week compared to a Hospitality average of 27 hours.

We can identify high and low earners by sector. The following shows the percentage of workers earning less than €400 and more than €1,600 per week. 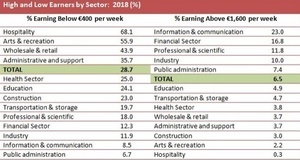 29 percent of all employees earn below €400 per week. However, over two-thirds of Hospitality workers earn below this amount while workers in the arts, distributive and administration sectors also have a disproportionate share of low earners.

At the other end we find the Information, Financial and Professional sectors had the highest percentage of employees earning more than €1,600.

There is one interesting sector – Public Administration. This is made up of civil servants, Gardai, prison officers, employees in non-commercial semi-states and agencies – approximately 100,000 employees. This sector is 100 percent public sector, unlike the Health and Education sectors where there is a considerable proportion of private sector workers.

While Public Administration had the second highest median weekly earnings, it had the lowest level of low-income earners. But it didn’t have a big proportion of high earners either.

This suggests a more ‘egalitarian’ pay structure; that is, the gap between the highest and lowest earners was smaller than other sectors. To test this suggestion, let’s turn to the CSO’s second release on the public / private pay differential.

But there are serious flaws in this headline comparison. First, there are many jobs in the private sector that don’t exist in the public sector – hospitality, retail, etc. Second, weekly earnings don’t take account of hours worked. Third, the comparisons are not like-for-like.

Thankfully, the CSO has performed an analysis which attempts to compare similar jobs in the public and private sector. This means factoring in a range of variables: gender, age, full-time/part-time status, supervisor status, temporary/permanent status, hours worked (including shift work and overtime), length of service with current employer, union membership and enterprise size.

When factoring in these variables, they compare permanent, full-time jobs for people aged between 25 and 59. This is what they found (a negative figure indicates that public sector pay is below their private sector counterpart). 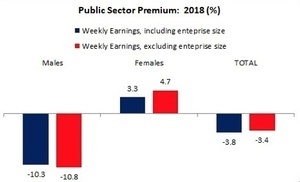 The CSO uses two measurements – including and excluding enterprise size (as there is debate over how relevant that is). Overall, on a like-for-like basis, public sector pay is between 3 and 4 percent below the private sector.

In testing the proposition that the pay structure in the public sector is more equal than in the private sector, the CSO shows the following: 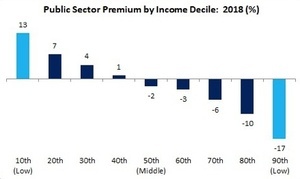 Here we find that the public sector has a premium for low and average income earners. In the lowest 10 percent, public sector wages are 13 percent higher than their private sector counterparts.

At the higher income levels, public sector employees earn 17 percent below their private sector counterparts. In short, the gap between the highest and lowest-paid is much narrower in the public sector.

What can we draw from this selection of CSO data?

Clearly, precarious contracts are an issue. But lack of social supports (in particular, childcare and eldercare) may limit people’s ability to take up more work.

Greater employee-based management (through the right to collective bargaining) of wages throughout the economy could have a beneficial effect.

Reducing precariousness, increasing social supports, and wage management – if we are serious about a more equal society that can boost living standards, we will need to create policies to achieve these ends. 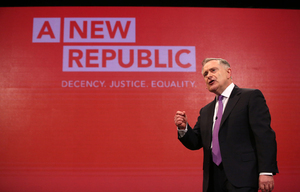