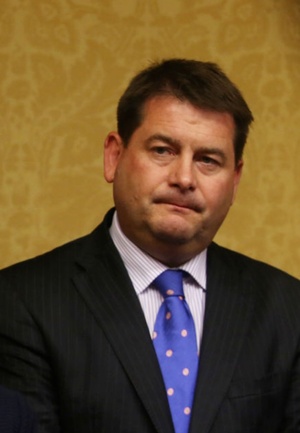 The party has just released the following press statement on behalf of Mr Murphy:

“Last night, on Tuesday the 3rd of December, I met with Acting Ceann Comhairle and gave him a letter informing him of my decision to resign my seat in Dáil Éireann.

“The contents of the letter are included below.

“I also met the Taoiseach Leo Varadkar last night and spoke to him about my decision. I will commence a new position in the European Commission today.

“I will of course co-operate with any relevant statutory procedure that may be initiated.

“In addition, I would like to acknowledge and give thanks for the support I have received from so many people: the Taoiseach and the Fine Gael party, at local and national level; my family; and most importantly I would like to thank the people of Cork North Central.”

I would like to inform you that I am resigning my seat in Dáil Éireann with immediate effect. I would ask you to please inform the House at an appropriate time. I would also like you to please convey my gratitude and best wishes to all members and staff of the Houses of the Oireachtas.

It has been an honour to represent the people of Cork and work with so many fine people for the past nine years. I would also like to thank you for your professionalism and courtesy.

Murphy handed over his resignation at 10:45pm, which is literally immediately after the walk-through vote on Eoghan Murphy finished last night

His resignation means SIPO or the Dáil ethics committee are now completely powerless to investigate any potential complaints against him, because he is no longer a public office holder

It also means, as I pointed out earlier, that if the Eoghan Murphy vote were to have taken place today instead, the Government would win by 55 votes to 54, and any of three independent TDs could collapse the government at a whim

Yesterday: Cheating Us All

As one follower points out: Maria Bailey suddenly has a lot of leverage within Fine Gael, as the Government collapses without her vote

34 thoughts on “Murphy Out”