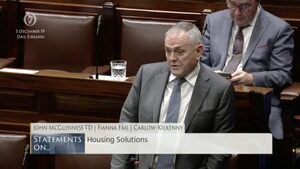 🔥
Ed Honohan gave everyone a chance that came before him – he held banks to account. President of the high court with a nod from the government took those cases from him.

If someone puts a #NoConfidence vote in the government, I’ll vote for it. @JMcGuinnessTD #Dail #not1home pic.twitter.com/yfE7LKzFbw

In the Dáil, during a debate about housing…

Fianna Fáil TD John McGuinness said if a vote of no confidence in the Government was put forward, he would support it.

It follows Fianna Fáil members abstaining from voting in a motion of no confidence in Housing Minister Eoghan Murphy on Tuesday night.

He also referred to his party’s confidence and supply arrangement with Fine Gael “a farce”.

The Fianna Fáil recalled how he introduced an Affordable Housing and Fair Mortgage Bill in the Dáil, assisted by Mr Honohan, “which went nowhere”.

“I have said many times in this House that the first obligation on any Government is to keep its people safe, and this Government has failed miserably to achieve that across many sectors.

“This Government introduced vulture funds to this country. The citizens of this State, through the Government, own or have an interest in some of the banks.

“If the Government wants to solve part of the housing crisis, it must acknowledge that the policies of the banks are the source of some of the biggest issues that we now face, including homelessness, evictions, repossessions, people being put out of their homes and not having any security.

“In July of this year, one particular bank sold 2,100 loans to a vulture fund, according to its portfolio of sales. Those were people’s homes. They ranged in value up to €250,000, so they were not big, expensive properties. These were homes to which people who hoped to own a home aspired.

“The Government allowed that transaction to take place and left those people in a vulnerable position with no security whatsoever.

“AIB is preparing a home loan sale that may result in 6,000 of those types of loans being transferred to a vulture fund. Other banks, aside from the one I have mentioned, will sell on family homes and AIB might be next.

“David Hall, the mortgage debtor advocate, called this situation a tsunami. Many commentators will try to undermine him and others by calling that a ridiculous suggestion, but the Oireachtas Joint Committee on Finance, Public Expenditure and Reform, and Taoiseach today discovered, as evidenced in the portfolio of sales of a particular bank in April 2019, that banks are now stockpiling for sale homes and mortgages with which they cannot deal.

“The banks are saving the costs that would have been associated with legal fees, administration and finding a solution to the problems within the bank and will cast the people affected to the discretion of the market and what the vulture funds might do with those houses.

“That is the kernel of the problem for a considerable number of people. The Minister of State and his Government do absolutely nothing about it. The Government gives tax breaks to those funds. In fact, it does not tax them at all.

“The Government allows the banks that it owns to do this to its people and will not change direction regardless of who tells it to. All of that is being piled on top of the housing crisis.

“It is heavily bureaucratic and some of the loops and hoops through which people have to go to deliver houses in an emergency situation are almost nonsensical. These are not normal times. We are in an emergency.

“That notwithstanding, the Department continues to put people through hoops and put obstacles in the way of the real delivery of houses.

“I agree that there should be a construction programme directed by local authorities with real solutions because they have the information. Local authorities and councillors know their housing lists inside out and do not have to be told anything.

“They are being stopped in the street and asked when a son or daughter will get a house or by a couple hoping to get a house who want to know when their case will be resolved.

“I do not know who the speaker was but the Minister of State said that they were to pay for bed and breakfast accommodation and hotels. The implementation of that as a policy does not work, and it is not the case that councils will do it immediately for people who are in desperate straits. That is simply not right.

“There is a policy that the Minister of State may have set down but it is not being adhered to across each and every county. As a result, we get different approaches to his different policies.

“Deputy Doherty has a Bill before the finance committee because the Minister of State is looking for solutions. It is the No Consent, No Sale Bill 2019. I will support him on that Bill because it was brought forward in the absence of any understanding of any real policy by this Government.

“I introduced the Affordable Housing and Fair Mortgage Bill here, assisted by the Master of the High Court, Ed Honohan, which went nowhere.

“The Government did nothing about it. As a result of ignoring all the Bills before the House that have passed Second Stage and are waiting to be debated in committee, the Government has introduced money messages and further obstacles of bureaucracy. It simply will not listen to anybody.

“Fr Peter McVerry was on a television programme the other night. He has no political interest, but by God did he lay it on the line for the Government and tell it where it is going wrong.

“The courts are dealing with cases where houses are going to be repossessed. That will mean that families will be put on the street.

“I know of a landlord in Dublin who is trying desperately to hold on to his house. There are at least six people living in that house who will be on the street.

“I know a lady and her children in Bray who have been before and humiliated in the courts. She has been dragged by security officers out of the bank as she tried to present her case directly to it.

“She has been threatened by the sheriff in the most appalling of ways. She is trying to hold on to her home for herself and her children and this State stands idly by and allows the thuggery that is involved in removing people from their homes.

“The Government should be ashamed that it has allowed this to happen.

“I point the Minister of State to the Glenbeigh sale where those who are trying to seek legal representation because of the manner in which that sale was conducted cannot get the Abhaile scheme.

“Even some of the schemes Ministers have in place are not able to be accessed by the people who need them most.

“The one man who stood in the gap and stopped some of the vultures and the banks behaving the way that they did, which I thought I would never see happen in this country, including thuggery and corruption – one can throw all the names one likes at it – is Ed Honohan.

“He gave everybody who came before him a chance. He held the banks to account and the President of the High Court, with a nod, I am sure, from the Government, took all those cases away from him. That is a shame in itself.

“It is administration that is not right and should not be accepted. I ask the Government to start in the courts with the banks it owns and stop these terrible evictions and repossessions and do something concrete about this issue.

“On the vote of confidence, I agree Fianna Fáil sat on its hands. It did the same with the motion on the Minister for Health, Deputy Harris.

“The fact of the matter is that a Minister is acting at one with the Cabinet. If a Member tables a motion of no confidence in the Government, I will vote for it because that is the way it should be.

“I honestly hope that this supply and confidence arrangement, which is a farce and is accommodating all this stuff, comes to an end quickly in the new year so that at least the electorate can have its say.”

Watch the debate back in full here 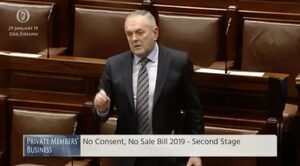 ‘A Typical Act Of Trying To Destroy The Messenger’ 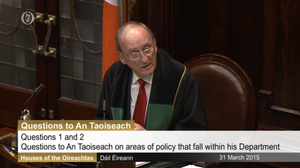 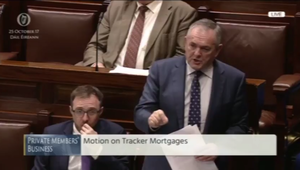 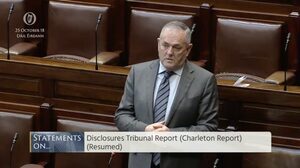 13 thoughts on ““I Agree Fianna Fáil Sat On Its Hands””