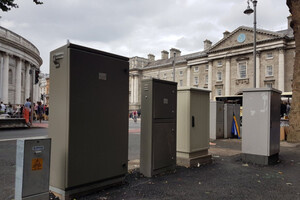 The question of Luashenge’s origin has baffled the public imagination and scientists for years. Despite hours of archaeological research, very little is known about who erected the cabinet formation and for what purpose. 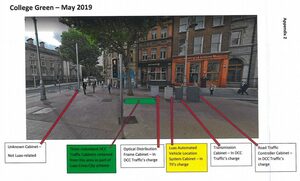 ‘Here is a wide view of the famous monument on College Green. An interesting feature of  Luashenge  is the mystery that surrounds some elements of its classical design. The left-most item is classified as an “unknown cabinet”. Nobody knows who put it there. It could have been aliens, the Russians, or indeed Telecom Éireann…. 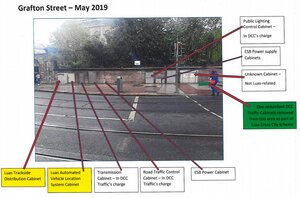 …Like the great passage tomb at Newgrange, Luashenge is actually not just a single isolated heritage site. There is an associated monument nearby on the wall (above) outside the Provost’s house at Trinity College.

This associated Provosthenge monument also has a mysterious “unknown cabinet” (above top right third down). It’s “not Luas-related” but once must surely have served a very important purpose, perhaps relating to prayer or direct communication with the gods… 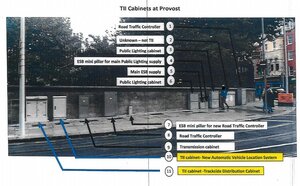 …Sadly, the Provosthenge monument has suffered some damage in recent times as this image (above) shows. The right-most cabinet, entitled “road traffic controller” has been removed. It was considered “redundant”. Hopefully, a new home has been found for it in the National Museum… 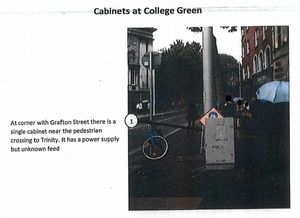 …above is the most striking parts of the complex. It is described by historians as: “A single cabinet near the pedestrian crossing to Trinity. It has a power supply but unknown feed.”

You can even take a virtual tour of the famous site here on Google Maps. That way, you can say you knew all about #Luashenge long before UNESCO finally list it as a world heritage site.’ 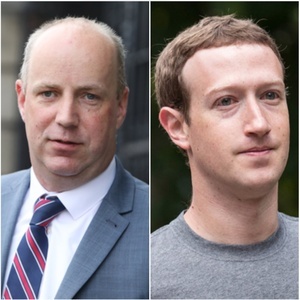 9 thoughts on “New Light On Luashenge”