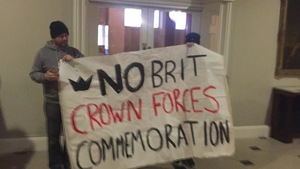 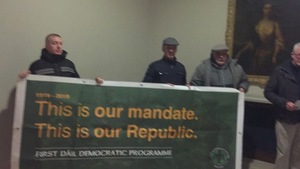 As of 3pm today, Irish Socialist Republicans have engaged in a symbolic and occupation of Dublin Castle, to mark the 101st anniversary of the establishment of the All Ireland Republic and to protest against any Free State Commemoration of British Crown Forces.

Members of the Republicans group have occupied a Public area of the castle and unfurled a large banner that reads ‘No Crown Force Commemorations’ while also holding copies of the 1919 Democratic Programme of An Chéad Dáil Éireann.

“…In recent weeks the Irish People have demonstrated that a Commemoration of British Crown Forces is completely unacceptable.

Today’s symbolic occupation is designed to remember the establishment of the Republic, but also to demonstrate that Republicans today will organise to prevent any such Commemoration from taking place.

But we go further. 101 years after the establishment of Our Republic we call on the Irish People to break with the failed partitionist states in our country and return your allegiance to the All Ireland Republic Proclaimed in 1916.

We call on the Irish Working Class to take a very simple step to demonstrate their support for the Republic by actively boycotting Leinster House and the February Election.”

24 thoughts on “Storming The Castle”