Catherine Noone called in to my mam about two weeks ago. In the middle of the conversation she apparently slipped in that Varadkar was autistic.

No one believed my mam when she told them, and this morning she has a face on like Mrs Doyle correctly guessing Todd Unctious’ name.

.@LeoVaradkar says Sen Catherine Noone has apologised for her remarks about autism and that is “good enough” for him.
He says people need to be “respectful” of people with autism
See @irishexaminer shortly for full reaction #iestaff #ge2020 via @Junomaco pic.twitter.com/qFz6oqk19w

Taoiseach Leo Varadkar was canvassing in Galway city when he was asked about comments made by Senator Catherine Noone in which she described him as “autistic”.

“…but you know, it’s not about me. I just think that we all need to be very aware and very respectful of people who have autism and people who are on the autism spectrum and we need to understand that those terms should never be used in a pejorative way at all.

“And we know that isn’t enough…but it is, it’s a good start and we’re going to build on it.”

Asked if Ms Noone should be sanctioned by Fine Gael, he said:

“No, like I say, she’s withdrawn her remarks in full and she’s apologised to those people she’s offended and that’s good for me.”

When it was put to him that Sinn Féin councillor Paddy Holohan had been suspended, over comments he made, and that “surely a suspension is warranted”, Mr Varadkar repeated that Ms Noone had apologised, withdrawn her remarks and that that was “good enough for me”.

He was asked by one journalist how he felt personally about the comments, while another asked if he is still encouraging people to vote for Senator Noone who is running for a seat in Dublin Bay North.

He said: “I encourage people to vote for all of our Fine Gael candidates. Richard Bruton and Catherine Noone are candidates in that constituency.”

Asked by another journalist if he’ll canvass with Ms Noone, Mr Varadkar shrugged and said: “It’s not on the schedule yet but I’m sure I will at some point.”

Day 14 of #GE2020 campaign and Taoiseach Leo Varadkar is in Galway city where he will no doubt face questions on one of his candidates having to apologise for calling him autistic. pic.twitter.com/IIX8MReP6k 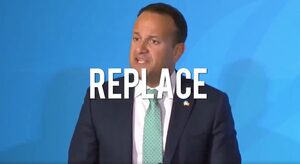 20 thoughts on “Meanwhile In Galway [Updated]”