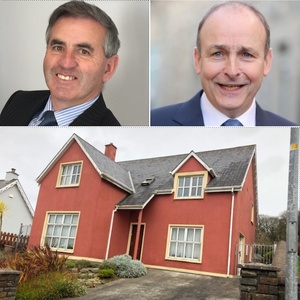 We all have them.

Via VIllage magazine [more at link below], Frank Connolly writes:

‘…A successful house builder on the newly zoned lands around expanding Cork city, John Fleming also developed what was, at the time, a luxury holiday-home complex at Courtmacsherry in picturesque West Cork, in the late 1990s.

In December, 1999, Micheál Martin took out a mortgage of £135,000 from Irish Life and Permanent to purchase 4 Meadowlands, one of the first of the large houses built in the scheme overlooking the sea in the small holiday village.

The property was purchased from John J Fleming Construction, one of the companies in the larger Fleming Group.

By this time, Martin was in government after being appointed to his first cabinet position by Taoiseach, Bertie Ahern, in 1997. A former school teacher, he was made Minister for Education before he was given the health portfolio in 2000 and then served as Enterprise, Trade and Employment minister from 2004 to 2007.

In January 2007, Fleming travelled to Hungary with Martin as a member of an Enterprise Ireland delegation headed by the minister and later announced that he had won a contract to develop a wind-farm project in the eastern European country. Later that year, Fleming’s company made a donation of €900 to the minister’s general election campaign.

…On 11th March, 2010, six days after Fleming’s property company went into liquidation (on 5th March, 2010) the Irish Permanent mortgage on the Courtmacsherry holiday home purchased by Martin, was cancelled, according to documents lodged with the Land Registry.

There is a reference in the Land Registry documents connecting the charge on the holiday property to the Martin’s family home  in Ballinlough, Cork which they purchased many years previously.

In July 2009, a further charge “for present and future advances” with AIB was lodged with the Land Registry in respect of the Courtmacsherry property.

Village asked Martin to explain the circumstances surrounding the acquisition of the property and the cancellation of the loan on 11th March 2010.

“The property was bought through an auctioneer with a mortgage in 1999.  In 2010, Micheál switched mortgage provider and the loan was restructured to include the balance of this loan and refurbishment of Micheál’s family home.  Repayment of this mortgage is ongoing.”

Asked was there any significance in the fact that the loan was cancelled, according to Land Registry documents, just six days after the company which sold the property, owned by John Fleming, went into liquidation (on 5th March, 2010), the spokesperson said:

“None.  See above.  These questions clearly represent an attempt to raise a controversy in the dying days of the General Election campaign where there is none.” [more at link below]

Previously: So, Why Did That Money End Up In Your Wife’s Bank Account, Mr Martin?

The Only Way In The Village