"I don't apologise for reflecting back on the hunger strikes, and if people looked at the full contribution of the speech it was to my own friends, my family, my supporters."

Sinn Fein’s @davidcullinane reacts to questions about a video showing him shouting “Up The Ra” #GE2020 @rtenews pic.twitter.com/uvS0hphrMZ

Waterford Sinn Féin TD David Cullinane (above), who was elected yesterday after receiving the biggest ever first preference vote in the Waterford constituency with 20,569 votes, responds to journalists’ questions about comments he made in a Waterford pub last night.

Mr Cullinane was recorded as saying “Up the Ra” (top) as he addressed a crowd of people in the pub while celebrating his electoral success.

Cullinane will have to explain ‘Up the Ra’ video – McDonald (RTÉ) 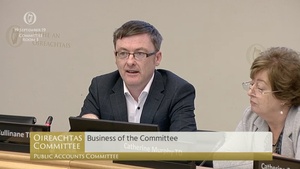 66 thoughts on ““Part Of The Excitement Of The Night””