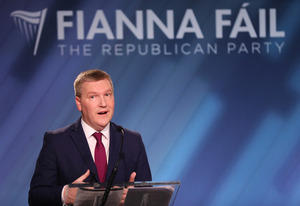 Bryan Dobson: “You were explaining that the intention of these negotiations with Fine Gael will be to form a full-term government. Can I put to you what your party colleague Eamon Ó Cúiv has been tweeting over night. He’s saying that the coronavirus is not a mandate for long-term government, he says a national government, set up for a short but defined period, would be more effective. What do you say to that?”

Michael McGrath: “Well I think there are a number of issues that arise from the suggestion of a national government.  First of all it is time limited to the duration of the corona crisis and we don’t know how long that will be. I think  it would be very difficult to get it together.

“There are also other issues that need to be dealt with and planning has to be put in place and actions taken to deal with the housing crisis, to deal with the wider issues in the health service and to start making progress and tackling the climate and biodiversity emergency and so I think it would be difficult to get agreement across the full spectrum of Dáil Éireann on all of those issues.

“We absolutely need to have a co-ordinated, national response to the coronavirus issue but I think we also need to have a Programme for Government that tackles the issues that were to the fore of the general election campaign last month and that people did vote for action on those issues.”

Dobson: “Yeah, but I think it’s also accepted that the result of the election was also a mandate for change. And one wonders how, after four years of Confidence and Supply with Fianna Fáil and Fine Gael, how another four or five-year government of your two parties would actually represent any change at all.”

McGrath: “Well first of all, Fianna Fáil was not in Government for the last four years, we were in Opposition and yes we did provide a Confidence and Supply agreement because of the need as we saw it for political stability given the emerging Brexit issue. So this would be a very different arrangement if it were to come to pass, if Fianna Fáil were to enter Government, we would clearly have a very significant influence in that Government.

“Obviously, we will need to bring any draft pPogramme for Government if one emerges to our own parliamentary party in the first instance and, of course, the members of Fianna Fáil also have to be consulted and to give their consent. But there are issues beyond the immediate coronavirus issue that need to be dealt with and those issues cannot be put on the long finger. We do need to have a Government in place now that has a mandate, that has the authority to deal with the immediate issue.

“We need to have the Oireachtas up and running and functioning. The Government needs to be able to bring in legislation, have that debated and have it enacted. We had a €3billion package announced two days ago and more way well need to be done.

“And in order to do that, you need to have a government in place.”
Dobson: “So what finally should be the timescale here? What should be the deadline for all this, given the urgency you’ve outlined?”

McGrath: “The talks will need to take place. We will bring a real focus from a Fianna Fáil perspective on advancing those talks as quickly as we can but we also need to get it right. And there’s a seriousness of intent on our part certainly as a party to try to advance this process…”

Dobson:  “So is it something that should be complete within weeks?”

McGrath: “I think that is achievable. I think it will require all of those involved and others will be involved as well. That would certainly be our expectation and our hope that others will be involved as well. And people need to absolutely focus on this now. Because we’re four and a half weeks on from the general election, Bryan. And no alternative government configuration is emerging. Let’s be straight with people.”

McGrath: “It is time to move this process on and to see if a government can be formed. Fianna Fáil will certainly play its part if that can be done.” 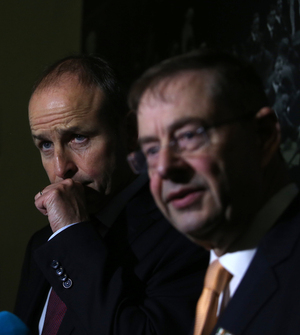 Coronavirus is not a mandate for long-term Government.

The current crisis must be dealt with radically and effectively. It does not allow for considered policy development across a wide range of areas (eg health, housing,climate change) over an extended horizon.

Instead, it demands immediate laser-like focus over the next few months on protecting our communities and the public health service, and managing the economic and budgetary impact.

A national government set up for a short but defined period would be more effective during this post-election phase in terms of taking the potentially drastic measures that will be required in the short-term by building consensus and de-politicising the crisis.

Remember, the threat posed by Coronavirus and the actions that may be required to combat it, are unprecedented in modern times and needs buy-in from the main parties and the public at large.

That national government should work closely with the NI Executive to adopt an all-island approach to containment and delay of transmission.

Within the Fianna Fail party members must be given an opportunity to approve or reject any proposed coalition. If an Ard Fheis cannot be held, alternative arrangements to facilitate that process should be made.

From my meetings with FF members, there are many within the party who are opposed to any coalition with FG having campaigned for a change in policy and direction after 9 years. They do not believe that this arrangement would represent change. 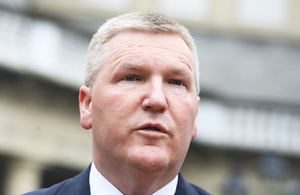