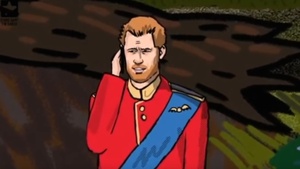 …even when the chats became bizarre, including when fake ‘Greta’ talks about an arranged marriage to six-year-old Prince George and the need to move penguins to the North Pole, Harry doesn’t appear concerned and keeps chatting.

The prince also claimed Mr Trump had ‘blood on his hands’ over his climate credentials and labelled the British political system ‘broken’. He said the world was being run by ‘some very sick people’

Say Hello To My Little Friend

The Meanest Prank Of The Summer