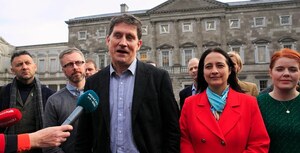 The Green Party leader Eamon Ryan released a statement calling for a national unity government, his party’s second such call. He said:

“Right now, the country is in the midst of an acute crisis. The kind not seen before. Around the country, communities are standing up together to protect the vulnerable and make sure everyone has what they need.

“We need this cooperation amongst our leaders too.

“We must work together in an unprecedented way to tackle this unprecedented crisis. That is why we are calling for a cross-party unified approach to government to deal with the crisis.

“Tackling the Coronavirus demands an all of government approach. We can see from other countries that stopping the spread of the virus and rebuilding after will take many months and likely more than a year. Other countries have taken this step and we believe that a crisis of this magnitude demands it.

“We are again calling on parties to suspend talks on forming a majority government and come together around a crisis National Unity Government. This would bring together all parties and independents to form a cabinet split proportionately and could be done in a way to minimise the disruption for departments dealing directly with the crisis.

“There is a difficult road ahead of us but we can get through it if we work together.”

‘A State Of Mind That Needs To Be Challenged’

“Hope This Will Not Impact The Good Work Happening Right Now”

8 thoughts on ““We Need This Cooperation Amongst Our Leaders Too””