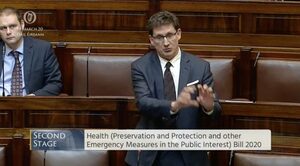 “Taoiseach, I would like to commend you for your speech the other night. I think it articulated the desire for our people, for us, to show solidarity and collective action in response to this unprecedented crisis.

“That sense really came home to me I think was it Friday night or Saturday, people watching online, there was that video from The Temple of the Bars, where a good-time crew was singing ‘Sweet Caroline’.

“Hands holding hands, touching me, touching you. Sweet Jesus, you could not make it up for being out of tune with where we all were.

“And in some ways, I felt at that moment, do you know the same way back in the Eighties when ever [inaudible] soccer supporters abroad, ‘well if other people are gonna be hooligans, we’re going to be the number one, best behaved people in the planet’ collectively.

“That same sense there, at that moment, we’re not gonna do that, hands touching hands, we’re going to look after each other. And I know there’s questions, people say ‘well, will we get fatigue’ in terms of our behavioural response.

“Anyone who thinks that, any scientist has yet to meet my mother, Mary Ryan who’s at home, I’m sure, watching this maybe like many a mother and father, grandfather out there.

“If there was an anti-viral Olympics, we’d win gold.”

“She’d make the Chinese communist government look like limp wimps when it comes to the measures that will be taken to hold this threat at bay.

“We’re going to be good at this, we’re gonna take it on. We’re gonna pull together as Taoiseach, you and others, have said.

“But, for the moment, we’re going to take on the suppression route. Now how we do that, where we maintain the mental health of our people is important.

“Or let’s get every south-facing windowsill in this country and let’s plant our seeds in the next week so that if there is any supply crisis and food in two or three months time when this really hits hard, we’ll have our salads ready to go.

“Everyone’s home, every windowsill. All of us being part of the solution.

“And equally Taoiseach, we were saying this to you yesterday, as leaders we agreed it, we need to come together and get more political involvement and the solutions are great.”

Earlier: Meanwhile, In The Dáil

‘A State Of Mind That Needs To Be Challenged’