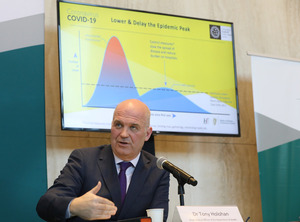 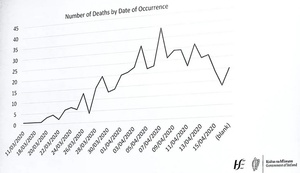 A new graph produced by Chief Medical Officer Dr Tony Holohan suggests that daily deaths associated with Covid-19 may have peaked in Ireland on Tuesday, April 7.

This new analysis paints a very different picture to that suggested by the figures published to date.

It shows that daily deaths actually peaked ten days ago on 7 April at 39 deaths, although the reported total that day was 36.

The number of deaths officially reported for Friday 17 April is 44, the highest yet. But in reality, only 20 of those deaths actually occurred on Friday. The rest could properly have been allocated to earlier dates.

The graph showed that in reality the number of daily deaths from Covid-19 in Ireland has halved since peaking ten days ago.

An international model that projected that Ireland may have already passed its peak should not be relied upon and ‘simply isn’t true’ | Follow live #coronavirus updates: https://t.co/gfJYTqGaOW pic.twitter.com/8x2oUL0tsn

Paul Cullen, in The Irish Times, reported that, according to modelling data in the US, Ireland had passed its peak of Covid-19 infections.

“Peak resource use of hospital and intensive care unit (ICU) beds here passed on April 4th, while peak deaths passed on April 6th, according to the data published by the Institute for Health Metrics and Evaluation (IHME), which is based at the University of Washington in the US.”

Chief Medical Officer Tony Holohan was asked about this study at the Department of Health’s nightly press briefing and rejected it, saying:

“It simply isn’t true. It’s not reliable…that’s not something that people should either listen to or rely upon” 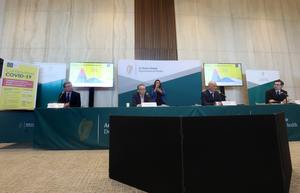 …during the same press conference (go to 27.19), Mr Cullen and Dr Holohan had this exchange about Covid-19 and its “peak” in Ireland.

Paul Cullen: “I hear your criticisms of that US modelling but at least they did produce a model. Nature abhors a vacuum. You’ve waited a long time to come out with the results of your own model. We did have a leaked number at the very start, of the number of people who might get the disease [15,000 by the end of March] at the very start of this crisis. We haven’t heard anything yet.

“So, I mean these exercises have their limitations but people are looking for a route map?”

Tony Holohan: “Sure, so just a couple of things on that. So the figure that was mentioned at the beginning wasn’t so much a leak as a projection that we would be at, which was correct, if we continued to grow at 33%, from the number of cases that we had at the point in time that number was identified. We would have gotten to 15,000 by the end of the month.

“The reason we didn’t get there was because we managed to flatten the curve as a society and we did that through the various measures that were introduced and what we were clear about was that with the modelling work that we’re doing, and it’s being led as Dr Glynn has said, by Philip Nolan and a team of 50 mathematicians across the academic and university sector, it’s a huge enterprise of activity.

“And the reason we haven’t given a forward projection from that is because we don’t believe that we’ve seen the point, and I said this clearly last week on a couple of occasions, the stability, if you like, in the model, to allow us to project forward. In other words, we’re continuing to see improvement in the reduction in the growth of this epidemic.

“So at the beginning, that figure of 15,000 came off a projected growth, day-on-day, of 33%. And that has been reduced steadily and it’s, we believe, still continuing to fall.

“And the further it falls, the further into the future will come the point of peak and the lower that peak will be.

“And we want to reduce that as much as we possibly can. And we think that it will take, you know, at least, tomorrow, and the next…in other words, the further we go into this week, to give that projection, the more stable and certain that projection is.

“And that’s the reason that we could have given you a forward projection two or three weeks ago. But the confidence limits of that, in other words, the variation, or the margin of error, as you might call it, would have been so great as to make that uninterpretable or useless information for the point of view of our action. And that’s why I think, correctly, we’ve waited until we had a good model, which we believe that we have.

“And an ability to see the full effect of the measures that are in place which is at least ten days post the last set of measures being put in place to start to make any forward projections which we will give you on Thursday of this week.”

Also on April 7, the Minister for Health Simon Harris signed the regulations which gave gardaí the power to enforce Covid-19 restrictions.

There Must Be A Catch

40 thoughts on “A Peak Behind The Curtain”