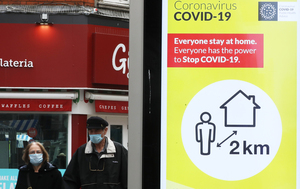 I’m writing this on Earth Day. It’s the fiftieth anniversary of the first holding of the event. It is a wistful anniversary. The past five decades, despite increased awareness, has seen rapid denigration of the global environment.

The coming fifty years offer what may be our final opportunities to stop this rot. To stem the poisoning. To halt the madness.

At this mid point between awareness and action we find ourselves living in the most surreal of circumstances. The cacophony of what we have been encouraged to believe was normal life, has been silenced.

That silence, laced though it is with fear, provides pause for thought. For some there will be comfort in going back to what was. But we can’t.

Going back to what we had been doing is a return to insanity. That type of madness that Einstein described, in doing the same thing again and again while expecting a different result.

We need to better define what it is we mean by necessity. What is it that we need?

We are learning, in the most contrived of the situations, that there is much that we can do without.

In the near future advertising agencies will use all their sophisticated tools to convince us otherwise. When they do we should remind ourselves of the words Mick Jagger has been singing for the past fifty five years, that its all about “some useless information supposed to fire my imagination”.

And he went to the London School of Economics.

The old ways are gone, or at least they need to be banished. Our current indicators of success are flawed. In truth they are dishonest. They come nowhere near measuring our individual or collective well being.

As economics is currently structured it cannot put prices on many things of real value, and thus does not want to believe such things have value.

A child’s smile, a parent’s anecdote, a friend’s concern, can never be placed into any equation determining Gross National Product. And yet each contribute significantly to any sense of well being.

Over the past two centuries of economic prosperity, what we have defined as progress has come at a price. We have largely ignored this price because we have chosen not to define it.

The price has been mostly borne by the making available of environmental inputs as being cost free. To put this in more familiar financial terms, we have accumulated an environmental debt more acute and more deep than any monetary debt we have obsessed over.

Unlike the repayment of monetary debt, in meeting our environmental debt we benefit from doing things differently, which are better for being different.

A popular meme on the internet is a cartoon of a climate change conference, where a presentation is being made listing the changes needed to bring about a greener World. One delegate turns to another and asks “What if it’s a big hoax and we create a better World for nothing?”.

This is where we are at now.