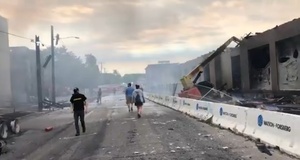 Meanwhile, On The Grand Canal At Mespil Road