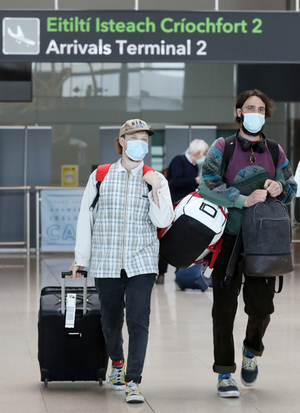 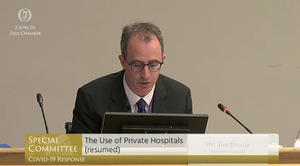 From top; Arrivals at Dublin Airport last week; Secretary General of the Department of Health Jim Breslin speaking at the Covid 19 Committee in the Dáil yesterday

At the Special Committee on Covid-19 Response….

Secretary General at the Department of Health Jim Breslin said:

“This is being considered by several Departments and will be subject to further consideration. There are complex issues of international and domestic law involved. The EU position and that of other member states is also evolving.

“The WHO has said that the most plausible future scenario in the dynamic of Covid-19 may involve recurring epidemic waves interspersed with periods of low-level transmission. That is the context within which travel restrictions apply and continue to be reviewed. It is important that, where travel needs to take place, it does not pose significant risk to the wider public.”

“The Minister for Health has been asked to look at the issue of mandatory self-isolation and come back to the Government on it.

I will not prejudice what that process will involve. It will, however, involve significant input across relevant Departments, including the Departments of Health, Transport, Tourism and Sport, Justice and Equality, the Foreign Affairs and Trade, the Taoiseach and others, to look at this issue and come back.

“It is relevant because, if we go back to the start, if one gets to a point where community transmission is really low in the country, then we can all circulate again. That is exactly what we want to do. We want to get the economy, industry and retail back.

If during that process, however, one imports cases from travel from overseas, then one can restart the uptick in cases again. One can then have a break-out of cases leading to a wave. There is a trade-off and it is about the level of risk involved.”

4 thoughts on “Forty Shades Of Isolation”