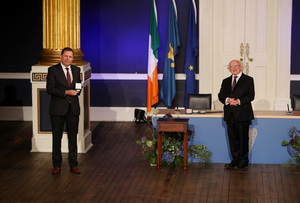 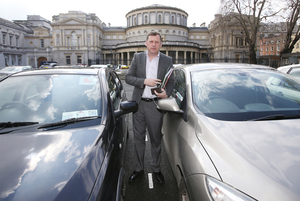 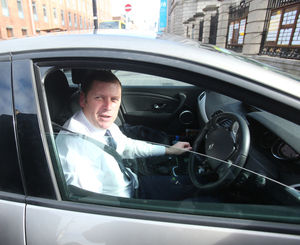 From top: Barry Cowen (left) Minister for Agriculture and the Marine receiving his seal of office from President Michael D. Higgins (right) at Dublin Castle; Mr Cowen in 2016, the year his Renault Megane was stopped at a Garda checkpoint on his way back to Offaly from the All-Ireland football final

The ban arose as Mr Cowen [age 49 at the time] was not driving on a full licence. He was categorised as a ‘specified driver’ as he was driving on a Learner Permit.

[Taoiseach and Fiann Fáil leader] Mr [Micheá] Martin didn’t know about the offence when he selected Mr Cowen as a minister.

“I first became aware of this issue on Friday afternoon. I have spoken to Minister Cowen and I accept that his remorse about this incident is genuine.

“I am disappointed that I learned about it in this way and have made that clear to him.”

Get angry. Its one law for them & another law for others. Cowen is in good company with his Midlands Minister @RobertTroyTD and the curious case of the 3 missing summons and the penalty points quashed. And they have the neck to lecture the rest of us. 🙄https://t.co/UOVd72jXgs

4. Drove to Offaly, minimum 90 mins on All Ireland final day.

Something very odd in this case . Barry Cowen TD is very 53 . Apparently he had a provisional driving licence at age 49.. It took me a few years to pass my test but 32 years that's a bit of a stretch or did he previously have a full licence and lose it ? Ff are back

Troy: I Was No Heel

In All Good Conscience

We Are Not So Different You And I

27 thoughts on “What The L Were You Thinking?”