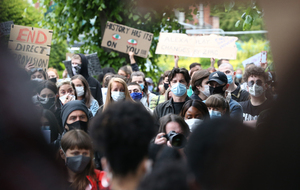 As a former colony, historically unsullied by the sins of slavery and imperialism, Ireland’s national identity has been largely free of the culture of pathological self-hatred found across most of the liberal West today.

An uncomplicated sense of national pride has remained the default, even and sometimes especially on the political Left. But all of that is about to change.

“Toppling statues is just the beginning”, ran a recent Irish Times headline, if the goal is “How to make Irish culture less racist.”

As self-flagellating stories about the Irish public’s racism are set to now become a daily part of life, Ireland’s elites can breathe a sigh of relief.

Any populist pressure they sensed brewing while overseeing a deeply economically unequal society with skyrocketing homelessness, rents and outward youth migration can now be replaced with an imported moral narrative that turns the spotlight around on the reactionary masses who must, in the name of equality, learn to think of themselves as privileged.

Russell fought in the War of Independence and died trying to secure arms from Germany in 1940.

Wrongly thinking that historical facts could ever stand a chance against the wrecking ball of the current international woke cultural revolution, some Republicans correctly pointed out that he was not doing so out of any allegiance to Nazism, having tried to secure arms from any nations that might give them. Protesters still vandalised the statue anyway, painting it with the gay pride rainbow flag with added black and brown to mark their support for Black Lives Matter.

Having uncritically adopted the fashions of American academia, Ireland’s new young educated elite have started parroting the imported language of “white privilege” versus “people of colour”, and the dangers of nationalism versus the superior multinational capitalism-friendly values of openness.

There is little reason to think the cultural revolution sweeping across Europe from America will stop and listen to the “but we’re on your side!” pleas offered by Irish Republicans about how they supported the anti-apartheid movement in the Eighties or how our nationalist heroes were anti-imperialists or that our Republicans today are economically left-leaning and pro-immigration.

Anyone who thinks these details will matter, and that any remnant of Irish cultural nationhood will be immune, is simply not paying attention to the unstoppable internal logic of the current cultural revolution underway.

This new generation of elite aspirants are already showing that they make no such distinction and simply recast the native Irish as “white people” whose privilege needs to be checked and ultimately dismantled….(more below)