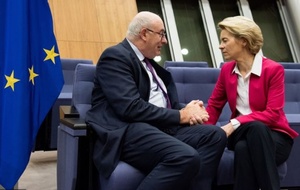 Ms Spinant added that it was difficult for the Commission to establish if Mr Hogan’s reported movements between Kildare, Kilkenny and Galway were in line with Irish regulations, “which differ county to county”.

Pressed by reporters on the issue of Mr Hogan being cautioned by gardaí for using his mobile phone while driving, Ms Spinant said traffic incidents are for local police authorities to address.

Why Do All The Good Ones Go?

Ask Not What I Have Done To Your Country

30 thoughts on “Ursula And Duress”