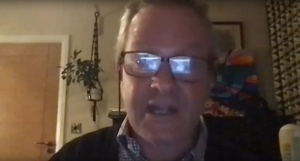 Will he squirm or will he ANSWER the questions?

Under formal investigation by the Medical Council for speaking out about Covid-19 restrictions and the nursing home scandal, family GP Dr Marcus De Brun (top) takes to the piping ‘hot stool’ to consider YOUR questions.

Yes, even the rude ones.

With Vanessa Foran and John Ryan.

35 thoughts on “Doctor In The House”