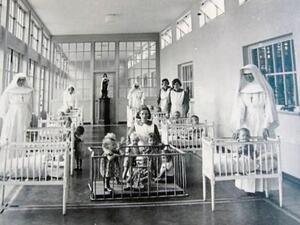 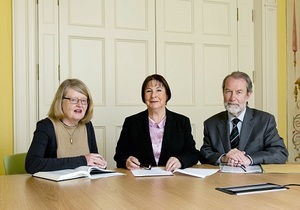 The Mother and Baby Homes Commission, led by Judge Yvonne Murphy, is scheduled to hand over its report into mother and baby homes to the Government.

It will be reviewed by the Attorney General and Department of Children and Youth Affairs before it is published in what could be a number of months.

Ahead of this, last night The Irish Times reported that a Cabinet meeting yesterday heard that the report will “increase pressure on the Government to issue a State apology and move forward with a financial compensation scheme for victims”.

It also reported that:

“Ministers were also told that a referendum or new legislation will be needed to deal with confidentiality and privacy issues where birth parents do not want their data released.”

…Last night law lecturer and Director of the Child Law Clinic at University College Cork tweeted that no referendum is needed on tracing legislation – a point, he said, which has been repeatedly made by his academic colleagues Dr Maeve O’Rourke, David Kenny and Fergus Ryan. 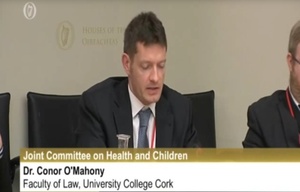 In 2015, Dr Conor O’Mahony (above) appeared before the then Joint Oireachtas Committee on Health and Children to speak about on the then pre-legislative scrutiny on the then Heads of the General Scheme of the Adoption (Information and Tracing) Bill, a bill which subsequently lapsed with the most recent dissolution of the Dáil and Seanad.

“I am grateful for the opportunity to address this issue today. I will focus briefly on some of the competing rights issues that have already been discussed this morning in the context of the Constitution. I will also say a little about international human rights law.

“As members are aware from earlier contributions, much of the discussion in this area is informed by the 1998 decision of the Supreme Court in the I O’T v B case, [where the court found that the natural mother’s constitutional right to privacy outweighed the child’s constitutional right to identity] which addressed the competing rights of adoptees and natural parents.

“Much of the discussion that takes place when constitutional concerns about laws of this type are raised is based on this case and on what I would see as a greatly exaggerated concern about possible constitutional issues. Much of the discussion is based on focusing on the outcome in the I O’T v B case rather than on the principles established in that case. The outcome of that case was a ruling in favour of protecting the mother’s privacy. The court made that ruling in the context of something of a legislative vacuum. This law is seeking to fill that vacuum.

“With regard to the laws enacted by the Oireachtas on issues like adoption identity and tracing, the court said that it is for the Oireachtas and not for the courts to establish how to balance competing rights and how to deal with sensitive matters of social policy. In the vast majority of cases, the courts will defer to the balance struck by the Oireachtas unless there are extreme consequences of doing so. That is the key message set down in the decision in the I O’T v. B case. We have seen that message repeatedly emphasised in subsequent decisions of the Supreme Court.

“For that reason, I think the key message to take from the I O’T v. B case is that it is up to the Oireachtas to legislate in this area and to reconcile competing rights.

“Any future court would be exceptionally slow to second guess that and to strike down any law that is enacted in this area. It is important to stress that.

“Aside from the fact that the constitutional impediments are greatly overstated, there is also a legal imperative to enact laws of this nature. That legal imperative derives from Ireland’s international human rights law obligations, in particular, the UN Convention on the Rights of the Child and, to a lesser extent, the European Convention on Human Rights, both of which recognise the right to identity as a key right recognised by international human rights law.

“There are various degrees and levels to that right but the minimum core is to know one’s origins, parentage and conditions of birth; in other words, to have access to a birth certificate as a minimum core. Ireland’s international human rights law obligations require the enactment of this legislation.

“As long as the legislation remains unenacted Ireland is vulnerable to findings by international human rights committees, such as the UN Committee on the Rights of the Child, that we are in breach of our international human rights obligations. Far from there being a rights-based reason to not enact the law, there are rights-based reasons to go ahead and enact this law forthwith.

“Equally, there is an issue of consistency internally within Irish law. Identity is strongly protected by the Children and Family Relationships Act in the context of donor-assisted human reproduction. If it is important in that context it is equally important in the context of adoption and far more people are affected. If we are to be internally consistent in our laws, this law is necessary to bring the area of adoption in line with the area of assisted human reproduction.

“If the law is to be enacted, it is important that it is done properly. I mentioned the idea of the minimum core of the right to identity being at the very least a bare minimum of access to a birth certificate.

“The notion that the law would potentially qualify that bare minimum create exceptions to that is unfortunate. If there is legal advice that suggests that it is constitutionally necessary to qualify that I am not sure I would agree with that advice and I would like to see it in more detail.

“Ultimately, if one has a right which sets birth certificate as a bare minimum, not files, medical history or contact information, that is a bare minium. Any suggestion that be denied on the basis of a potential threat to safety, especially in a context where there is extensive civil law and criminal law, in particular, the Non-Fatal Offences Against the Person Act which provides other protections in those circumstances, is not necessary.

“I do not believe there is any constitutional reason or any justification for qualifying that bare minimum right of simple access to the birth certificate, balancing it, of course, in the context of contact information, that makes more sense. When it comes to the bare minimum or the birth certificate I do not believe that is necessary. Rather than defining the idea of compelling reasons, I submit that the preferable course of action for just that level of access to information would be simply to remove the qualification altogether and remove the idea to define that idea of compelling reasons.

“Finally, an issue mentioned at the earlier discussion and which I mentioned in my written submission is the issue of step-parent adoption. I will not explain all of that in detail again because we are well aware, by now, of what it involves, except to note that a commitment was given during the debate on the Children and Family Relationships Act that the issue would be dealt with in this Bill. The Bill, as drafted, does not propose to do that. There is a very simple solution available, based on the English legislation.

“A simple short miscellaneous provision, modelled on the English legislation, included in this Bill could resolve that issue. Last year, of the 112 domestic adoption orders, 74 were step-parent adoptions, so I think this is an issue which needs to be addressed. It can be addressed very easily and this Bill presents an opportunity to do that.”

On the first page, it notes how “the GDPR is supreme over all Irish law including the Constitution”.

People who have died have no rights under the GDPR.

If you’ve been angry with the gov on this, buy the @Independent_ie tomorrow. I’ve written a longer than usual piece explaining why you’ve been completely misled by campaigners. 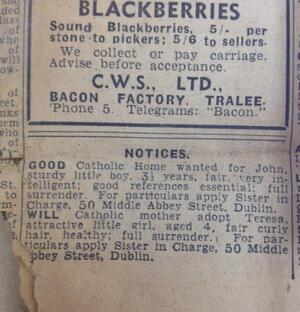 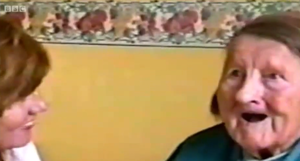 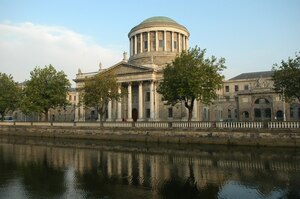