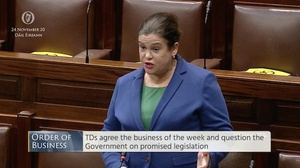 It will not surprise you to read that there is now a row in the Dáil about whether the schedule should be amended so that Helen McEntee can take questions about the nomination of Seamus Woulfe to the Supreme Court. pic.twitter.com/DOCbLct110

“You are behaving in a way that is an abuse of your office,” says Mary Lou McDonald.

“The heavy gang are back,” proclaims Mattie McGrath. Minister for Justice Helen McEntee has said she is being accountable to the Dáil, despite refusing Opposition demands that she make a statement in the chamber regarding the appointment of Supreme Court Justice Seamus Woulfe and then answer questions.

The minister said she is prepared to answer questions about the appointment through the long-standing process of written queries submitted by Opposition TDs several days in advance known as Ministerial Parliamentary Questions (PQs).

She told a news conference in Dublin that this process is standard practice, which happens every week and has been in place for many years.

Minister says she is being accountable to Dáil over Woulfe (RTÉ) 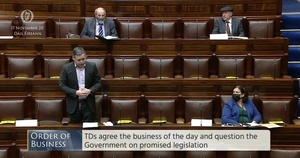 3 thoughts on “‘The Heavy Gang Are Back’”