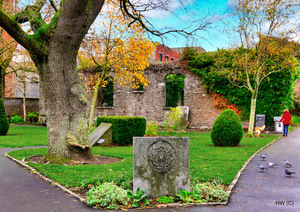 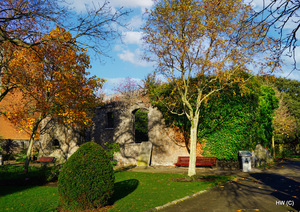 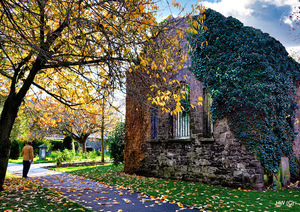 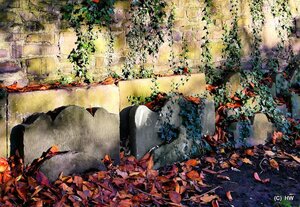 Dublin has some beautiful well-known parks but one of my favourites is the petite St. Kevin’s Park on Camden Row. It is usually bypassed by tourists but favoured by locals. St Kevin’s Park is unusual in having the ruins of a church and being a half park and half graveyard.

The grounds were redeveloped some years ago and the cemetery became todays park. It has a long history, the first mention of a church on the site dates back to the 13th century. The church ruins in the park today are a later addition built in 1750. This church was closed in 1912.

The park grounds still have some notable headstones in situ but the majority have been removed. The old headstones now line the perimeter of the park and more are around the walls of St. Kevin’s church.

Unsurprisingly the park is reputed to be haunted. Archbishop Dermot O’Hurley was buried there after being executed for treason in the 16th Century. He secretly baptised Catholics during penal times in St Kevin’s. He was eventually arrested, imprisoned and tortured and was sentenced to death. The authorities had him executed by slowly hanging him until dead. He was buried in St. Kevin’s but his grave is unknown today.

His spirit is said to be seen in the park where he performed the baptisms. During the transformation of the graveyard into today’s park, the owners of graves that could be traced were offered to have the occupants remains exhumed and buried elsewhere but many graves were unidentified and their bones still lie there today. The angry souls of these disturbed graves reputedly haunt the park.

Notable existing graves on view in the park are:

The Moore Family, relatives of Thomas Moore the poet and composer.

Hugh Leeson, brewer, and whose family gave its name to Leeson Street in Dublin

Jean Jasper Joly captain of the Irish Volunteers in 1798.

John Keogh, friend of Theobald Wolfe Tone, he once owned the land that is now Mount Jerome Cemetery in Harold’s Cross

Also, of note, the 1st Duke of Wellington of the Battle of Waterloo fame, was baptised in St Kevin’s.

During the 18th century the cemetery was a hunting ground for body snatchers, a very lucrative business. After dark a fresh grave with loose soil was sought out. A hole was quickly dug down to where the head lay . On reaching the coffin, two broad iron hooks under the lid, pulled forcibly up with the rope, broke off a sufficient portion of the lid to allow the body to be dragged out.

There is a dark history to the park as well. Tommy Powell a six-year-old child, was tragically murdered here in 1961. Broadsheet had an excellent 2017 article about the unsolved murder that you can read at this link here.

Today St. Kevin’s is a haven for wildlife. There are many species of birds including wrens, blue tits, robins, magpies, blackbirds and wood pigeons as well as mammals like hedgehogs, urban foxes, squirrels and wood mice.

Three species of bat are to be found in the park, Leisler’s bat, the common pipistrelle and the soprano pipistrelle. These bats make use of the ivy around the old church ruin as a roost. It is a lovely place to visit but perhaps for those of a nervous disposition, not after dark. 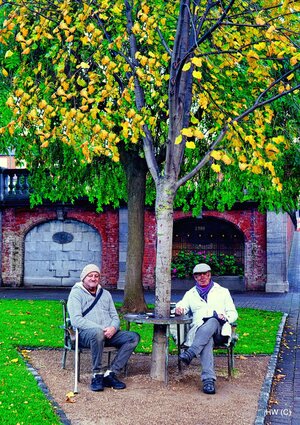 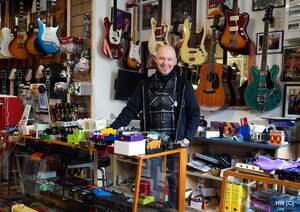 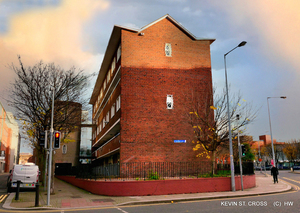 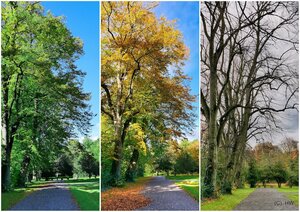