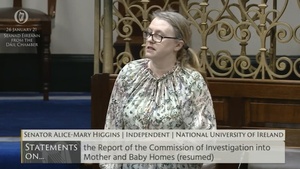 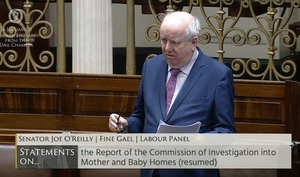 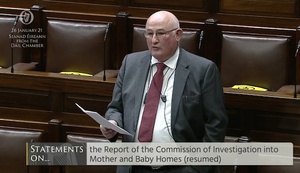 Senators resumed debating the conclusions drawn from the Report of the Mother and Baby Homes Commission of Investigation with many powerful contributions.

“Questions remain to be answered by the commissioners themselves over some of the language. I do not think the Minister is in a position to answer the questions that we might have about certain phraseology used in the report. I refer to the statement that there was no evidence that children were harmed in these institutions. That is an obscene statement and one that is nothing but insulting to the survivors of those homes. Direct testimony is evidence. People recounting their direct experience is evidence. Are we looking for CCTV footage? Are we looking for photographic evidence? Who are the commissioners to decide that the evidence is not there? Were they so long in the bubble of doing this report that they became desensitised and cold to the experience of the people that lived through this experience?

“Questions must be asked about the accounts that some survivors gave that were not properly accounted for in the investigation. I refer to questions that were apparently put to survivors that were never put to them.

“We cannot simply brush over those things. There is now an onus on the Government and the State to address those questions properly. I reiterate my call that the commissioners involved in preparing this report should, take questions from survivors, the public and the media. They are not in isolation. They are publicly known now; we know who they are. They were paid well for their work. They were given ample time to complete their work. I do not think the State received from them the level of workmanship that would have been expected on that report.”

“It is also clear that in this State, it was a man’s world. There were men who got girls and women pregnant and did not take responsibility. Of course, that does not apply to all men, as others have said, but there were those who did not take responsibility. We think of the men in the church, and it was predominantly men, although many nuns also acted in an unchristian manner within these institutions. We think also of the men in politics, and it was predominantly men, in the Dáil, Seanad and local councils. Some of those men were in charge of these institutions.”

“I was in a house on the night that a girl who was working away from home rang her mother to tell her she was pregnant. The girl’s father was a stern, Victorian man and I remember the family that night being in panic about how they were going to deal with it and how they would tell the father.

“As soon as that man heard it, the first thing he said was: “Bring my daughter home and let me look after her”. Not every family disowned their child and I take grave exception to the practice of calling out families as having deserted their children.”

“I do not buy it that some natural mothers do not want contact with their children.

“The evidence shows that one in 20 natural mothers who were on the national adoption contact preference register did not want contact with their son or daughter, but at no stage did they want information about their health circumstances and so forth denied to their child.”

“The process is just starting now and I see it as being a two-pronged approach. The first is that we are remembering and acknowledging in a very public, holistic and proper way. We are even allowing further testimony. We are doing all that. The second is that we compensate in a generous, holistic and unmiserly way that will not be difficult to access. These people experienced enough hardship as vulnerable people. It is time they were the recipients of kindness from the State.”

“The report tells us that the Irish Human Rights and Equality Commission asked for any investigation to be informed by human rights law, but the Government did not opt for that approach in its mandate to the commission. This raises very serious questions. The sidelining of human rights really does show.

“When the State puts a payment on the heads of vulnerable people, as it still does with regard to direct provision and homelessness, it can be dangerous. When the State surrenders power to religious orders, as is currently planned for the national maternity hospital, it can be dangerous. I urge the Minister to work with all of us to build a state that takes responsibility for the past and for the future.”

“We had the Dáil Éireann republican courts from 1919 to 1924 during the struggle for independence when the people turned their backs on the British common law system. There was a judge all those years ago called James Creed Meredith.

“In a groundbreaking decision at the time, by applying Brehon law rather than common law, he ruled that the father of a child born out of wedlock ought to pay maintenance. It is a small thing. When we restored the British-style Judiciary in 1914 we reapplied the common law and we reversed that decision.

“That was the position all the way up to our lifetime and the 1980s. Then, past Members of this House – we should give them credit for it – including Mary Robinson and Nuala Fennell, were instrumental in giving recognition to such basic rights as inheritance rights and recognition for children born outside of wedlock.”

“I refer to the insistence that the Church and the State did not force women into the mother and baby homes and that there was no forced adoption or coercion. I speak for many people when I say that those statements are incredible, almost audacious. My colleague, Senator Craughwell, put it correctly when he said that this is gaslighting survivors. In the same week that we have had the first person convicted and sentenced for coercive control, a crime for which I believe a twelve-and-a-half-year sentence was handed down, I find it extraordinary that we can recognise coercive control as a crime but not cast our eyes back into our grisly past and see the deep coercion that took place in those homes.”

“When the Department of Health proposed turning the Sean Ross Abbey into a home for children with special needs in the 1960s, the Bishop of Killaloe rejected the proposal. His intervention resulted in a number of visits to the bishop by senior civil servants and letters from Ministers. The closure of the Sean Ross Abbey was delayed for several years until the bishop had died and his successor subsequently gave his approval. During those years, many children died.”