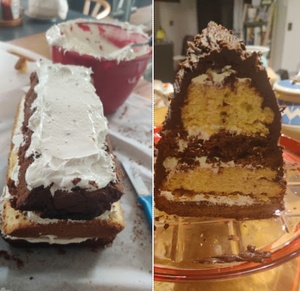 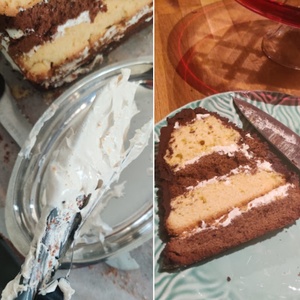 So, let’s start with two simple everyday Madeira Bakes, in Loaf form, one brown one yellow.

The basic mix per sponge

240gms soft butter, 200gms caster sugar, 3 eggs, 210gms Self Raising & 90gms Plain Flour sieved and mixed together. One with 50 gms cocoa sieved in with flour, the other loaf with 45 gms Custard powder + 3 or 4 tbls milk

Grease and line a standard sized loaf tin, or a pair if you have two the same, and start heating the oven to 170°

Add one egg, and one third of the flour (+ cocoa) mix, blend gently, and repeat. That’s your brown sponge done.

For the yellow, proceed as above, then mix your custard powder with part of the milk, get it to a barely pouring consistency, and add to your sponge mix, while beating gently, and that’s your yellow sponge.

Bake for one hour but check at 50 and maybe 55 minutes with a skewer, if you are happy at either touch point do take them out, and remove from the tin onto a cooling tray. Let them go stone cold. If possible, leave overnight. They need to be proper Madeira firm lads.

Do not attempt this unless you have a good reliable kitchen thermometer and a sturdy stand mixer, one that can go at full belt for at least 8 minutes without fuming. The alternatives are to melt shop bought white marshmallows, or buy it in altogether.

105gms Granulated Sugar and 170 mils of Golden syrup, or if you can get it, a light corn syrup.

If it helps, I used golden syrup only because it was already open in the press, but it does leave your ‘Mallow with a winter white complexion. If you want Cork Whiter than Daz White, then you need to use a clear light corn syrup.

* Into a pot over a low heat and mix to dissolve the sugar, once dissolved rack up to full heat, and have your kitchen thermometer at the ready.

Decent stirring now but do not let the syrup boil over, at 116° on the dot remove from heat immediately. (start again if you smell burn)While the sugar and syrup are heating up to dissolve, in your stand mixer, start gently whisking or beating if you like, your egg whites and cream of tartar into a light foam.

* Once your sugar syrup is at the 116° its now molten caramel, so bring it over (carefully) to your now foam’ishly egg whites, bring your mixer hup’to full speed, and slip your syrup in. Keep your mixer on full speed for 8 minutes, until its a thick white glossy fluff triumph, but importantly, at room temperature.

Tip in your vanilla paste and salt and go full speed again for about two minutes. Don’t be alarmed by the pitch black spots specked on the edge of your mixing bowl. That’s the centrifugal effect on the vanilla seeds. This is why baking is considered by many as a science – using centrifusion force to create your Battenberg is the work of champions.

Health and Safety warning, this stuff is sticky, sticky like ye’ve never made with eggs before sticky, so clean as you go with it. Have clean containers, and spatulas, and palette knives if you have them all ready. And don’t attempt to make ‘Mallow Fluff without an apron or with smallies in the vicinity.

This stuff might smell and taste lovely but has the welding power of Sudocreme and with all the allure of a marmalade made with honey and too much sugar. With sprinkles. And it goes everywhere if you let it.

Level off your Madeira Loaves, and splice into equal halves. You should have four even layers, two of each.

Start with brown, and layer of ‘Mallow Fluff, and start to bevel the long sides. say 30° on the left and 120° on the right. I used a paring knife and had a container ready for the cut offs.

Next your yellow, start the bevelling from the finish point of the base layer, when you’re happy its even and tis starting to look like the second floor of a pyramid, slather another layer of ‘Mallow Fluff. 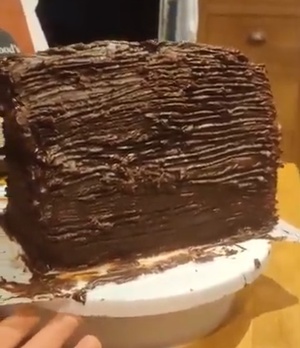 The Chocolate external coat and render

When its runny and smooth, just gorgeous like, whisk by hand andblend in the cream. Keep whisking, and whisk every so often, as you go along like.

Paste a thin layer all over your Real but still naked Battenburg, and let it rest for about five minutes.

Then lash the rest all over, a thick as you can. Then wait as long as you can before trowelling it all over with a fork for the Real Battenburg horizontal ridges.

But wait an hour or so before cutting into it. Gather around to hear that heel hit the plate. You’ll know tis all about Cork but without the ropey version of de’ Banks.

If ye don’t mind like, since Cork people don’t like to be told what they should do, especially with Cork food, and they’d be dead right of course, but I use unsalted butter.

That ‘Mallow Fluff, there’s going to be loads left, but it should keep for a week or so in the fridge for other adventures, just make sure tis in a good, sealed container that you can trust.

You might want to just use all Self Raising in the brown Madeira element as the Cocoa does hinder the rise, but only slightly. Or you could use a half tsp of Baking Powder to help it out.

You can also just take the sponge mixture on its own like, add the zest & juice of a lemon, for an old school Madeira. But do sprinkle a good tbls of Caster Sugar, or even two, on top before going into the over for the traditional Madeira crack affect your Aunty had.

Before I leave ye to it, let me tell ye, I loved planning and putting this together, yep, tis about time too since I talked about it for ages. But less of that, and more of this, Real Battenberg is a great cake to make, but give yourself the time and the attention Real Battenberg is entitled to, whether you like cake or not.

And do you know what lads, change the colours, the flavourings, even the coatings. Shur its always going to be our Battenburg anyway, we we can do what we like with it. Hon’ Cork.

All pics by Vanessa Foran 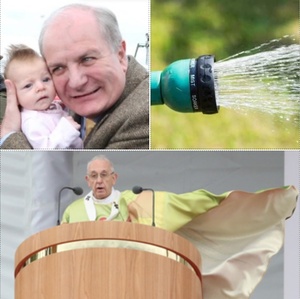 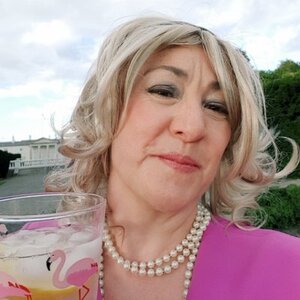 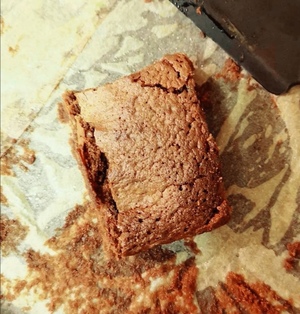