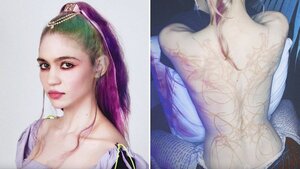 [Alt pop star] Grimes has burnished her otherworldly reputation with a large back tattoo of what she calls “beautiful alien scars.”

Grimes has had her eyes on cosmic horizons all 2021, recently claiming she’d be willing to travel to Mars “after age 50” even if it required “manual labour until death.” She also vowed to get one of her partner Elon Musk’s brain chips, saying, “We’ll have the knowledge of the Gods.”

Grimes Shows Off New Tattoo of “Beautiful Alien Scars” (COS)

What Were They Inking?

What Were They Inking?

12 thoughts on “What Were You Inking?”